Exclusive: Inside Bryson DeChambeau’s bid for 59 at BMW Championship 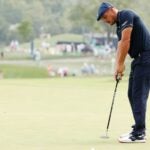 Bryson DeChambeau came up just short of history on Friday.

When Bryson DeChambeau stood over his ball a mere 6 feet from the hole on the 18th green at Caves Valley Golf Club, he knew what was on the line. After playing 58 shots to near perfection, he was one more solid stroke from the record books, looking to become the 13th golfer in Tour history to shoot in the 50s.

DeChambeau lined up his putter, settled into his arm-lock putting technique, and struck the putt. It never touched the hole. The magic number 59 had eluded him.

“I had the right speed; I misread the putt,” said DeChambeau, GOLF.com and GOLF Magazine’s Playing Editor. “I played it at three inches outside but it only broke one.”

But how did DeChambeau get to this moment on the 18th green? After his round, he caught up with GOLF.com to give an exclusive inside look at his run toward history.

Players knew Caves Valley was gettable this week after Thursday’s scores. The field average was 69.2 through 18 holes, while Jon Rahm, Rory McIlroy and Sam Burns shared the lead with a trio of 64s. It was a welcome change from the carnage presented at last year’s BMW Championship.

Even as the scores in Round 1 were low, DeChambeau didn’t take advantage as much as some of his competitors. His four-under 68 was solid, no doubt, but there was room for improvement.

The 27-year-old started with a flurry on Friday. He got off to a quick start with a birdie on 1 from 11 feet, and another at the 2nd from 3 feet. He kept the momentum rolling by eagling the par-5 4th and followed that with a birdie on No. 5.

“When you start with five straight birdies, in my brain I know that I’m playing well,” DeChambeau told GOLF.com. “I know where my score is at, but I don’t let it affect me. My focus is on executing the shot and going through all the information I need.”

The middle of DeChambeau’s round keyed his surge into red numbers. With his driver fully dialed in, he used brute strength to overpower the course. DeChambeau finished the day gaining 6.4 strokes from tee to green, easily the best number in the field.

“The course is awesome,” he said. “It’s a bombers’ golf course. It gives you room to hit driver, or to lay back and hit to certain spots when I need to.”

His tee shot at the par-5 16th didn’t find the fairway, but it did put the eight-time Tour winner in a spot where he could reach the green in two. Despite missing the short grass, DeChambeau was in decent shape after his ball found a trampled-down area of rough just off the cart path.

When his long iron was in the air — soaring some 250 yards toward the green — DeChambeau barked at his ball.

The ball listened. It hit the middle of the green, climbed the slope at the back of the putting surface, and then slowly trickled back toward the hole. By the time it stopped rolling, it was 3 feet from the cup.

When he knocked the ball into the hole, he was 12 under and 59 (or even 58) was within sight. All he needed was one birdie over the last two holes.

DeChambeau’s iron into the par-3 17th perfectly penetrated the air on a heat-seeking path toward the pin, settling 17 feet below the cup. It was by no means automatic, but more than makeable.

Three feet short of the cup, it looked as if the ball would drop, and he would need just a 4 at the last for 59. But as the ball lost its speed, it curved back to the right and stayed above ground. A birdie at the last would be necessary if he wanted to make history. No matter, he’d birdied the finisher the day before. DeChambeau knew it was doable.

Like many of his drives on the day, DeChambeau’s tee ball on No. 18 was pummeled. It carried 333 yards down the center of the fairway and stuck on the soggy fairway. His approach was similarly well-executed, and his wedge zipped back from the back of the green to 6 feet below the cup.

Alas, it wasn’t meant to be. His ball started left and never came back. It was the shortest missed putt for 59 in the Shotlink era.

Despite coming up just short on his historic bid, DeChambeau was still pleased with his play. After recording just one top-10 finish all summer, seeing his game round back into form was a welcome sight.

“I felt like this round was coming,” he said. “I’ve been working so hard on my game, but it’s been a tough part of the season, but rounds like this when everything comes together makes it really rewarding.”