How a shank (!) could end up denying this pro a shot at millions 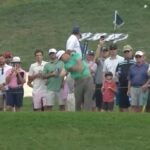 Charley Hoffman hits his tee shot on Saturday on the 17th hole at Caves Valley.

Charley Hoffman’s iron hit his ball, and it sounded more like a slap.

The crowd of maybe 50 or so behind the par-3 17th at Caves Valley said, one right after each other, “Ohhhh.”

Then there was the sound of impact.

“Charley Hoffman, that is not a good sound,” announcer Jimmy Roberts said on Golf Channel’s broadcast.

You didn’t need to see Hoffman’s tee shot during Saturday’s third round of the BMW Championship as much as hear it to know its fate. A shank. The ball would go right of the fairway and nearly right of water that’s more decorative than in play. From there, after a drop, Hoffman would pitch on and two-putt for a double-bogey five.

You could almost hear a sinking sound next.

Hoffman started the week 29th in the FedEx Cup standings, the measurement that determines each leg of the PGA Tour’s three-week playoff system. The top 70 are playing in the BMW. The top 30 will play in next week’s season-ending Tour Championship, where the winner receives $15 million.

And after Hoffman’s double, he dropped to 32nd in the Tour’s projected standings.

While other shots, no doubt, will be examined until after Sunday’s final round, one surprising shank might turn out to be the most damning given the tee-thin circumstances.

“Talk about bad timing for a bad shot,” Roberts said.