Netflix, hallway games and … Chelsea Piers? How pros are spending a rare Sunday off in NYC 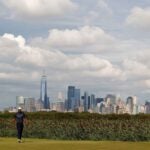 Ah, summer Sundays in New York City, when the world rests upon the very tip of your fingers. Grab lunch in Little Italy. Check out the Museum of Natural History, or the Met, or the MoMa. Or an afternoon cruise down the Hudson to the Statue of Liberty. And did somebody say ‘Citi Bike Tour’?

The pleasures of life as a New Yorker on a Sunday in August are not lost on most within the city limits. But for a select few on this Sunday, they might as well be winning lottery tickets.

With hurricane Henri barreling down on the greater metro area, the PGA Tour took the unusual step of canceling play at the Northern Trust at Liberty National Golf Club in Jersey City — just across the river from New York. As such, the group of 74 players who played into the weekend at the first FedEx Cup Playoff event of 2021 found themselves in an unusual position: with a rare Sunday off, and the largest city in the world in their backyard. (The final round will be played on Monday.)

So, what are the game’s best doing with their free Sunday in New York? The answers are varied.

“If Covid quarantine has taught us anything, it’s what to do the whole day cooped up in a room,” said Jon Rahm, who left Liberty National on Sunday tied for the lead. “We’re at a hotel, so instead of me getting up to get food, I can room service the food and hopefully the fitness center and spa and some of the amenities at the hotel are open and we can take advantage of it.”

“We have a four-month-old in the room that needs a lot of attention,” he said. “Take a lot of walks around the hotel, I don’t know, but it’s definitely going to be a fun family day.”

For others, the off-day won’t necessarily mean a day off.

“The course is closed, so I haven’t put too much thought into it,” Tony Finau said. “Maybe look at another course to practice. But if the weather is what it’s supposed to be, then it’s going to be an indoor day and a lot of Netflix and reading and eating.”

Whenever the final round commences, Finau will begin two strokes off Rahm’s mark and, he hopes, with a rejuvenated short game courtesy of his hotel hallway.

“I think hallway games, that’s probably more like in the hallway where you can chip to things,” he said. “But for sure the putter is going home with me tonight.”

In fact, Finau argues, there’s actually some credence to utilizing carpet as a short-game sharpener.

“I’m going to have to figure out what to do because I’ve never had an off-day in the middle of the tournament,” Thomas said. “Probably a lot of putting in my room and a lot of eating and a lot of TV watching.”

If things get dire, Rahm has a backup plan ready.

“I guess I could meet Adam at Chelsea Piers [driving range] … not really,” Rahm said with a laugh.

The city that never sleeps … or stops working on its game.