Jordan Spieth: ‘I’d rather play better at the Ryder Cup than in the Tour Championship’ 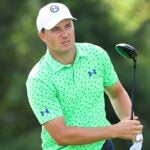 Jordan Spieth opened The Northern Trust with a one-over 72 on Thursday.

The ultimate goal for those playing in this week’s Northern Trust, the first leg of the FedEx Cup Playoffs, is to advance to the Tour Championship. Then, it’s to win at East Lake.

But Jordan Spieth is already thinking about the Ryder Cup too.

Spieth joined The Pat McAfee Show on Wednesday to talk about his new Fan Duel partnership, recent resurgence, relationship with caddie Michael Greller and more. He also got into some Ryder Cup discussion, which is rapidly approaching on Sept. 24-26 at Whistling Straits in Wisconsin.

Spieth, at the 10:35 mark of the video below, was asked how much he’s thinking about the Ryder Cup at this point of the season.

“I’d rather play better at the Ryder Cup than in the Tour Championship,” he said. “… We never get team sports, so to be able to have team sports — when you win a championship in team sports you get your parade, right? For us, that’s the Sunday afternoon after winning a Ryder Cup on U.S. soil, where everyone sticks around and you get to kind of party with everybody. That’s our parade. That’s what we look forward to.”

The Tour Championship is the PGA Tour’s playoffs finale and, along with the Players Championship, one of its biggest events. It also pays out $15 million to the winner, although Spieth, who has more than $47 million in career earnings and even more in endorsements, probably isn’t too worried about the FedEx Cup’s big-time bonuses. (Spieth also won the Tour Championship and FedEx Cup in 2015; the bonus that year was $10 million.)

Spieth still hasn’t secured a spot as one of the six automatic qualifiers for the U.S. team, but regardless, he’ll make the team as a captain’s pick.

“It’s going to be hard, but our team this year looks stacked,” Spieth said. “We looked that way in the last one in Paris and we didn’t win. I think we’ll kind of go in with an underdog mentality, even though we have such massive talent on the U.S. side.”

After this week’s Northern Trust, the FedEx Cup Playoffs continue with the BMW Championship and Tour Championship. The Ryder Cup is three weeks later. The top six players on the points list following the BMW will automatically make the team, and six captain’s picks will be made after the Tour Championship.

“There’s no breaks coming up in these next six weeks,” Spieth said. “We look at the Ryder Cup as a major championship in our mind and try to peak for it.”