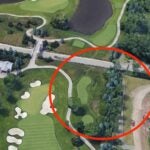 The area around the 9th tee at Liberty National in which Rory McIlroy's 3-wood is presumed to have gone missing.

The search is on at Liberty National.

A day after Rory McIlroy confessed to hurling his TaylorMade 3-wood into the trees by Liberty National’s 9th tee during Monday’s final round of The Northern Trust Open, Liberty National staffers were out combing the foliage like miners panning for gold.

“Once we saw the quote, we sent a couple of maintenance guys and golf guys out there, and they climbed trees and spent at least two or three different trips of at least half-hour, 45 minutes a piece,” Lee Smith, the club’s general manager, said in a phone interview Thursday afternoon.

Either from the club or local treasure-hunters.

Smith said that over the last 24 hours binocular-toting memorabilia-seekers have been spotted on the edge of the club property, eager to unearth the missing club. “We’ve had to position somebody out there, because there are people trying to climb the fence to look for it,” he said. “We’ve had to secure the area to where we wouldn’t have trespassers.”

The area around the 9th tee is publicly accessible via Chapel Avenue, which runs by the tee box and down to Port Liberte, a condo development that overlooks the course.

Where exactly McIlroy tossed the 3-wood is unknown. In McIlroy’s recounting of the episode, he said he threw the club onto the New Jersey Turnpike, which would have been a physical impossibility, even by McIlroy’s prodigious club-launching standards. (The Turnpike — or the Turnpike extension, to be specific — is more than 300 yards from the tee.) He added: “I mightn’t have reached the road, but I threw it into the trees.”

“We tried to read between the lines of his quote,” Smith said when asked if had any sense for where the club likely came to rest. “If you know the 9th hole, there’s a little road that you hit over,” he said, adding, “Down below where that tee is, is actually where the compound is for the sign company that works for the tournament, as well as the caterers. We perused all of that area and tried to look for it.”

Smith said it’s possible a worker in the compound recovered the club on Monday or Tuesday and “didn’t know what it was, or isn’t on social media and didn’t know the buzz around this thing.”

The next step in the search quest, Smith said, is to dispatch a drone to survey the area. “We’re going to send that out there until something gets recovered,” he said. “You never know what we’ll find out there — there could be other clubs.”

And should Liberty National recover the 3-wood?

First call, Smith said, would be to McIlroy, who happens to be a Liberty member, to see if he wants the club back. “I’m sure he would decline,” Smith said. “And, at that point, we’ll probably keep it under lock and key.”