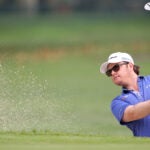 Harry Higgs hits out of the sand on the 13th hole at the Safeway Open on Friday.

The shot was good.

The ending was good.

The celebration was so good.

Harry Higgs’ second shot on the par-5, 557-yard 9th hole at the Silverado Resort and Spa North course, Higgs’ last hole after starting Friday’s second round of the Safeway Open on the back nine, flew 230 yards, took four bounces and rolled about 10 feet before dropping into the cup. A 2. On a par-5. Higgs had been 10-under and five strokes out of the lead. He finished 13-under and two strokes out. An albatross (a 6-million-to-one shot, according to the PGA’s website). To jump into contention. To finish his second round Friday at the Safeway Open.

Higgs took his 4-iron and slammed it to the ground.

He picked up his club and took about 10 steps toward the hole. He raised both arms and a wide smile broke out under his black sunglasses. He lowered his arms. He raised them again.

“I mean, I just – I didn’t know what – I don’t really remember what I did,” Higgs said. “I guess maybe I’ll be able to see it, but I just took my club and threw it on the ground. It was just full panic. At least I didn’t throw the club – that was probably a good thing. As long as it just went, you know, from 6 feet and throw it into the ground. You get so amped up and excited, I might fling that thing and Lord knows where it goes.

“I’m sure it looked funny and ridiculous. I’m sure it could probably be a “not top-10 play” just based on the poor reaction that I gave it. No, I mean, what a great way to finish. I had a little panic freakout, jump for joy and then I threw my club.”

Higgs said he gave the ball to the volunteer, Rufus. Higgs said he doesn’t keep memorable golf balls. He had considered tossing it back in his bag. “I just signed it, ‘Thanks for going with us, 2 on No. 9’ a couple exclamation points, signed it and handed it to him,” Higgs said. “I figure that was better than me keeping it and losing it.”

“If that was on 18, that would have been obviously sick and then Lord knows what the reaction’s like when there’s people around,” Higgs said, “I think we’ve all seen – I tend to do some crazy stuff if people start chanting my name, so yeah, nice and mellow.”

Higgs had been considering a nap after his round. He had teed off at 8:20 a.m. local time.

The shot, the ending and the celebration, though, were too good.

“I hope that I can, like, calm down in an hour or so so I can take a nap,” Higgs said. “My brother and I were joking – I was looking forward to a nap all day long and I might be too jacked up now to actually fall asleep.”