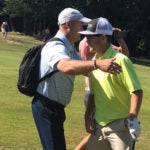 Caleb Manuel on the 18th hole at Gorham Country Club.

Caleb Manuel was tied with Armand Ouellette entering the last hole of the Maine State Golf Association Junior Championship. Ouellette had hit his drive about 250 yards on the 495-yard, par-5 18th at Gorham Country Club, then hit a hybrid to the green. He had a makeable eagle putt.

Ouellette did make it.

Ouellette did not win.

Manuel made a two.

Manuel, according to the Portland Press Herald, hit a 6-iron from 193 yards away on the 18th, and his ball went 193 yards. His 6-iron took one bounce on the green, rolled 10 feet and dropped. An albatross. A double eagle. A score made once out of every 6 million shots, according to the PGA’s website. One of the rarest scores in golf.

To win a golf tournament.

“I was thinking I’d at least have a putt to try to win it,” the 18-year-old Ouellette told the Press Herald. “What Caleb did was incredible. That was the greatest shot I’ve seen, especially under those circumstances.”