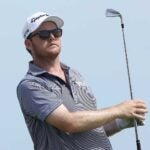 “I’m pretty sure that the endgame of all this is to shoot the lowest score possible, right?”

Harry Higgs is a refreshingly honest PGA Tour player who recently finished T4 in his first major championship ever at the 2021 PGA Championship. The TaylorMade staffer also plays with a set of the company’s P-770 irons, which have hollow-bodied constructions that reduce mishits and assist with ball speed. Higgs, like most would, calls them “game improvement” irons.

While many pros these days are transitioning into split iron sets that combine small-bodied short irons with game-improvement long irons, Higgs uses TaylorMade P-770 irons throughout his entire setup. The P-770s aren’t the largest irons in TaylorMade’s lineup, but they’re decidedly more forgiving than the P-7TW, P-7MB and P-7MC irons that are popular among Tour players.

Game-improvement style irons are often confidence inspiring due to their thicker toplines and larger profiles. They also help boost ball speed, launch the ball higher, and maintain speed on mishits. To put it simply, they’re just easier to hit.

The danger with tech-packed irons for faster speed players, however, is they’ll tend to not spin enough. If there isn’t enough spin on an approach shot, and the trajectory is too flat, the ball can go barreling over the green into trouble.

Knowing this, Higgs wanted to put the irons to the test with his launch monitor specialist Corey Lundberg before he put them into play.

Higgs is more of a feel player than someone who gets lost in launch monitor numbers, but he recalls seeing 2-3 mph more ball speed after hitting “four or five” P-770 6-irons. Added speed is always nice, but spin was the concern for Higgs.

“Hey, Corey, do these spin enough?” Higgs asked his instructor.

To truly put the irons to the test, though, Higgs took his P-770s to the golf course where he could hit shots into the wind and out of the rough.

Higgs said on our Fully Equipped podcast that most of the time on PGA Tour courses, hitting the ball over the green leads to a bogey. Therefore, he wanted to make sure that the P-770 irons didn’t penetrate the wind too much, and that he wasn’t getting any huge jumpers out of the rough.

According to Higgs, his launch stayed high with all of his irons in various conditions, allowing him to hold the greens even on shots hit with long irons. He played his first event with the irons at the 2021 Honda Classic, and he’s had them in the bag since. *TaylorMade P770 Irons are on backorder until June “Pure” can be a subjective term, unless you’re talking about TaylorMade P770 Irons. An advanced forging process produces pure shaping and soft yet solid feel at impact, with precision-milled grooves optimizing spin control, while Tour-validated contours provide that clean look that appeals to the better player. Tungsten weighting affords low, centered CG and increased MOI, resulting in a combination of forgiveness and workability the best in the world can’t argue with. Check out 150+ reviews from our gear experts in the ClubTest 2021 collection.
Buy Now

“I really don’t pay attention to what’s in other people’s bags to be quite honest with you, but there are [scratch players] that are so obsessed with having blade irons,” Higgs told Fully Equipped. “And they might be a great swinger of the club and skilled enough to use them, but if I’m over here using – I jokingly call them game improvement irons – why wouldn’t you? Usually that scratch player is like, ‘Oh I’ve hit blades forever.’ And it’s like a macho thing, right? ‘I’m the guy that hits blades at our club.’ It’s like, well, you might literally shoot lower scores if you don’t swing those irons. I’m pretty sure that the endgame of all this is to shoot the lowest score possible, right? So it may be, look, it might not work for everybody, but I think most people could…actually, if a PGA Tour pro is worried about his mishits and where they go, and how far they go, then everybody should be. So yes, it’s worth taking a look at maybe hitting something that’s a little bit easier to hit, and has a bit bigger sweetspot, and maybe is more forgiving. Because I can guarantee you we all hit bad shots, plenty throughout a day. Even days where we shoot six, seven, eight under, we’ve hit some bad shots.”

The takeaway here is that, even if you’re a better player, we all struggle to find the face of the club from time-to-time. If modern technology can help you reduce those mishits and play better golf, then they’re at least worth a testing session.

Want to overhaul your bag for 2021? Find a fitting location near you at GOLF’s affiliate company True Spec Golf. For more on the latest gear news and information, check out our latest Fully Equipped podcast with Harry Higgs below!