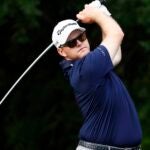 Harry Higgs didn't always have the luxury of getting free equipment.

Harry Higgs has been on both sides of the equipment fence in his seven years as a tour pro. For the past two years, the 29-year-old has enjoyed the more glamorous side as a PGA Tour member where gear is deposited into his locker (or bag) with very little effort. Everything is gratis. Life is good.

This is the gear scene every pro aspires to experience at some point in their career.

“The amount of free things that someone is on site ready to hand out is still hilarious to me,” Higgs said recently on GOLF’s Fully Equipped podcast.

Then there’s the mini-tour gear scene Higgs experienced for the first five years after leaving school. To say it’s anything but glamorous would be a severe understatement.

During an interview at Bandon Dunes Golf Resort, Higgs told two stories that perfectly encapsulate what it’s like for the other 99 percent of pros who don’t possess a PGA Tour card.

Prior to departing to play on PGA Tour Latinoamerica in 2018, Higgs made the trip to Carlsbad, California to test TaylorMade’s newest equipment. At that time, Higgs, who played at SMU from 2010-2014, had been using TaylorMade equipment in some capacity since 2011, so a relationship was already in place.

Higgs expected he’d have the chance to try out the new driver and 3-wood, but he also wanted to see if the new irons were better than the set of PSi he’d been playing for a year-and-a-half.

“I remember asking them, ‘Is there any way I can try the new irons?'” Higgs recalled. “They told me I could, but they’d have to charge me for them. It would be less, so at cost or whatever it is. I just kind of laughed. I barely had enough to travel to the first three or four events, so there was no way I was buying a set of irons.”

With just enough in the bank to start the season, Higgs made the trip to South America with his trusty irons. One month in, he had a problem: his 7-iron was out of commission.

“I don’t remember breaking it out of anger,” he said. “I think I took a swing and it bent. Well, I’m 96 percent sure it wasn’t out of anger.”

Without a backup set at his disposal and little in the way of petty cash for clubs, Higgs dug into his gear stash and unearthed a Ping 7-iron from his freshman season. The number on the head matched his broken PSi mid-iron, but it just so happened to be 2 degrees upright, a noticeable change for a pro who’s used to specific specs.

Instead of continuing the search for a TaylorMade replacement, Higgs inserted the Ping 7-iron and went on to win the Order of Merit to punch his ticket to the Korn Ferry Tour.

“Winning the money list gets me fully exempt on the Korn Ferry Tour, so next thing you know they could outfit me with a new set of irons and I didn’t pay for them,” he said. “But I struck it so well that I even thought about keeping the Ping 7-iron. It was so upright that if I ever needed to draw it, I was just going to try and get the 7-iron in my hands.”

Higgs has since moved on from the hodge-podge set of irons he used in South America, but he still holds onto the gear memories from his mini-tour days as a reminder of how far he’s come.

SPOTTED: What we know about Mizuno's new ST-X and ST-Z drivers

Inside Rory McIlroy's bag: 7 things I noticed while inspecting his clubs