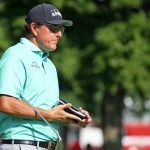 Phil Mickelson objected to a Detroit News article written about him earlier this week.

This week, Phil Mickelson is playing the Rocket Mortgage Classic for the first time.

Mickelson took umbrage with a story published on Tuesday of tournament week in the Detroit News. The author of the story, Rob Snell, obtained a trial transcript from 2007 in which a noted Detroit bookie testified about Mickelson. According to the story, the bookie in question, “Dandy” Don DeSerranno, placed one or more large bets on Mickelson’s behalf but was unable to pay the $500,000 he owed afterwards. The title of the story was undeniably enticing.

Mickelson’s lawyer Glenn Cohen spoke with ESPN’s Bob Harig and didn’t refute any of the story’s details — “He didn’t say anything that wasn’t true,” Cohen said — but did object to its timing.

“I’m disappointed they would curiously pick this week to write an article about a bet that was made over 20 years ago and a jury trial that took place in 2007, where the guy who was convicted is dead and where the only purpose for this article is to embarrass Phil Mickelson,” Cohen told ESPN.

Both Cohen and Mickelson sought to contrast the focus of the article with Mickelson’s charitable approach to the week. They found support on social media.

“Why the heck would you run a story that is so distasteful and such old news?” one user replied to the story’s tweeted link. Mickelson replied to her.

“Thank you for your support,” he wrote. “I don’t understand people like Rob Snell who’s opportunistic and selfish actions prevent people from wanting to come to Detroit and help in any way they can.”

As for the chances he’ll return to the Rocket Mortgage in the future? Mickelson didn’t make those chances sound particularly promising in a reply to another Detroit News reporter.

He reiterated that point in response to another poster.

“Took place 23 years ago. Had I not come here to Detroit it wouldn’t have ran,” Mickelson said. “My mistake making the effort to be here and have my foundation look into ways to help the local community. Didn’t even think of the opportunistic Rob Snells in the area would try and take advantage.”

Snell took the brunt of his criticism in a rare transformation for Mickelson’s feed, which generally stays in the range of “happy-go-lucky.”

Of course, it’s easy to imagine Mickelson changing his mind with a good result this week, and on Thursday he jumped out to a solid start, making birdie on three of his final four holes to post a round of three-under 69.

He spoke to the media after his round to explain his line of thinking. His remarks on the article are below in full:

“So it was a lot for me to play here because I had won the PGA and then I prepared for the U.S. Open, put a lot of time and effort into the U.S. Open. I played last week at Hartford and I’m going to be heading over to the British soon. So to play here was — I wouldn’t normally do it. I usually take a couple weeks off after the U.S. Open. But I really liked what Rocket Mortgage has really tried to do with this community and get involved and I wanted to — I felt like as the PGA champion, I would be able to bring some value and maybe help the tournament out.

“I feel that Rob Snell made an article this week that was very opportunistic and selfish and irresponsible. I just — you know, I was looking at some ways that my foundation might be able to get involved. When you have a divisive voice like that, you can’t bring people together, it’s very hard to bring people together, and that needs to change because the people here are great, but when that’s your voice, it’s hard to — it’s hard for me or somebody to come in and bring other people and bring other entities involved to help out because you’re constantly being torn down as opposed to brought together and built up.”

Will he think of returning next year?

“It was so much effort for me to be here and to have that type of unnecessary attack. Not like I care, it happened 20-something years ago, it’s just the lack of appreciation. Yeah, I don’t see that happening. I don’t see me coming back. Not that I don’t love the people here and they haven’t been great, but not with that type of — that type of thing happening.”

After speaking to reporters, he logged on to thank a few more fans for their support.

“Firing isn’t the answer,” Mickelson wrote about Snell. “Maybe a little more accountability on his part and less opportunistic behavior is a better solution.”

You can see more from these exchanges below: