‘Sipping wine, half lit:’ How much wine did Phil Mickelson drink after PGA win? 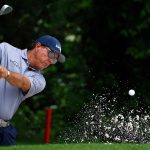 Phil Mickelson hits out of a bunker on Friday on the 5th hole at Colonial Country Club.

Phil Mickelson, at 12:12 a.m. on Monday, hours after his victory at the PGA Championship was asked on Twitter if he was on a plane flying home from the Ocean Course at Kiawah Island. He was, and four minutes later, he responded.

Mickelson would go on to tweet over 20 more times early Monday as he toasted his win, which made him, at 50, the oldest player to ever win a major. But just how “lit” was the celebration? How much wine did he have?

He had played more rounds than he had glasses.

“I got a problem with Phil’s celebration,” analyst Colt Knost said Friday on Golf Channel while following Mickelson during the second round of the Charles Schwab Challenge. “I asked him about it on Wednesday. He told me he only had two glasses of wine. He said he limits himself to that. I said that’s ridiculous. You won a major championship.”

“I mean, Curt Byrum had two glasses of wine when he made a cut,” Knost added, referring to his fellow analyst.

“I’m with you,” announcer Luke Elvy said. “He was quite subdued on the green when he won as well. I thought he’d go nuts. There’ll be plenty of time to celebrate and drink out of that Wanamaker.”

As GOLF’s Luke Kerr-Dineen wrote earlier this week, Mickelson simply said he “worked harder” when asked how he was able to win at 50. “I work harder physically to be able to practice as long as I wanted to and I’ve had to work a lot harder to be able to maintain focus throughout a round. If I work a little harder, spend a little more time in the gym, eat well, practice hard, there’s no reason why I can’t put it all out there for 18 holes.”

But it doesn’t come without sacrifice. His biggest?

“Food,” Mickelson said during his post-round press conference. “I’ve got to eat a lot less and I’ve got to eat better. I just can’t eat as much and I have to let my body kind of recover. But it’s also been a blessing for me because I feel better and I don’t have inflammation and I wake up feeling good. It’s been a sacrifice worth making.”