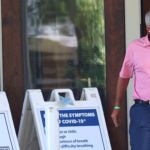 PGA Tour commissioner Jay Monahan addressed the media at the Travelers on Wednesday.

It pains me to type this, but it’s time for the PGA Tour to shut it down.

The best player in the world, Brooks Koepka, has now been (indirectly) sidelined by the coronavirus, as on Wednesday he withdrew from the Travelers when his caddie Ricky Elliott tested positive. Former U.S. Open champs Graeme McDowell and Webb Simpson have also W/D’d from the Connecticut event, after McDowell’s caddie Ken Comboy tested positive as did an unspecified member of Simpson’s family. Last week’s winner in Hilton Head, Simpson is up to No. 5 in the World Ranking, and losing the hottest player in the game is a psychic blow to the Tour.

Citing “an abundance of caution,” Koepka’s little brother Chase has withdrawn as well, after having played a practice round with Brooks and G-Mac. Cameron Champ is also out; on Tuesday, the long-hitting crowd favorite became the second Tour player to test positive for Covid-19, joining the nicest guy in golf, Nick Watney, who was afflicted the week before, at Harbour Town.

The whirlwind of bad news has overshadowed a stellar field in Hartford and raises serious doubts about the Tour’s ambitious plan to reintroduce fans at the Memorial, a mere three weeks from now. It has also thrown into sharp relief the hubris of the Tour trying to barnstorm the country amid a raging pandemic. All the major team sports remain sidelined as the leagues work out the precise details of creating hermetically sealed environments in which to compete, with players marooned in one place for the duration. The PGA Tour is a movable feast, traveling to a different city each week and along the way introducing an incalculable number of complications.

The Tour has trumpeted its own bubble but, really, it’s more like a breezeway, through which hundreds and hundreds of people pass every week. There are the players and caddies, of course, but also the many folks with whom they interact: swing coaches, trainers, agents, Tour officials, chefs, equipment reps, wives, girlfriends, nannies and sundry others. The collective level of vigilance to preventative measures is varying, to say the least, and all of these people are traveling across a country in which the number of coronavirus cases is still spiking three months after the first mitigation efforts began.

The return of professional sports should be a reward for societies that have eliminated the coronavirus; witness the jubilation of the 43,000 fans who recently packed a rugby stadium in New Zealand. Americans don’t deserve the PGA Tour. Not yet. More than 120,000 of our countrymen and women have already died from Covid-19 and we’re still haggling over whether it’s necessary to wear a mask to hang out in a crowded restaurant or bar or casino or indoor mall, none of which should be accommodating customers in the first place. Not yet.

This is the milieu in which the PGA Tour is trying to corral its fiercely independent contractors, some of whom refuse to stay in the designated hotel or travel on the Tour-provided charter plane. (Champ didn’t play last week so he had to arrange his own transportation to Hartford, putting him in harm’s way.) Justin Thomas rightfully criticized the carnival atmosphere in Hilton Head last week but members of various players’ entourages were spotted around town, enjoying their freedom. The Tour has greater control of the on-course environment and yet players are still occasionally fist-bumping, out of habit and perhaps defiance.

Brooks Koepka has talked about the commendable measures to which he’s gone to create his own bubble but the chef he has imported still needs to go to the supermarket, and last week Elliott attended the funeral of a friend. This is an intensely human instinct, but it only takes one deviation from the plan to let the virus in. Numerous players and caddies live in Arizona, Florida and Texas, states that have become hot spots. The coronavirus penetrated the White House, one of the most secure environments on earth; how can it be expected to not spread through TPC River Highlands, or Detroit Golf Club a week from now?

If the Tour plays on, the agonizing drip of withdrawals could easily turn into a flood. It’s better to pause the season now than wait until disaster strikes. The Tour has already been caught flat-footed once, during the week of the Players. Who among us can forget the thousands of partiers shoulder-to-shoulder at the Chainsmokers concert on March 10, a now-iconic image of not taking the virus seriously enough? Or the fans who swarmed TPC Sawgrass for the first round, on the same day the NBA pulled the plug on its season?

The Tour deserves credit, not scorn, for trying to restart its season. It was ambitious and risky but certainly worth a try. On Wednesday afternoon, commissioner Jay Monahan outlined a series of new safeguards that will be instituted going forward but it’s not enough, because it can’t be. Players and caddies are still not being tested every day; Monahan says the Tour does not want to consume too many resources from the host communities. As of Wednesday, South Carolina’s infection rate is up 134 percent versus two weeks ago. With this as a backdrop, should a single test have been used on the Tour while it was in Hilton Head? As cases continue to skyrocket across the country, playing on is, at best, challenging optics. At worst, it’s irresponsible.

On Wednesday, Monahan flew from Ponte Vedra Beach to Hartford to conduct a press conference. (If had made the trip on Thursday he would have had to quarantine for two weeks per a new policy announced by New York, New Jersey and Connecticut applying to travelers coming from hot-spot states.) The beleaguered commish looked like he hadn’t slept in days. Asked about the Tour’s decision to keep playing, he said, “We feel a great responsibility to inspire people.” For a few weeks, they did. It was a joy and a wonderful distraction to be gifted live golf, even in a sterile environment sans spectators. But the situation has worsened. The virus is increasingly engulfing the nation, and recent days have proven that the PGA Tour has no special immunity.