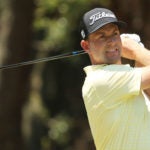 Webb Simpson was 109 yards behind playing partner Bryson DeChambeau. After their first shots on the 9th hole at Harbour Town Golf Links on Thursday. Simpson was impressed by how DeChambeau got there.

After his first 18 holes at the RBC Heritage, Simpson was lower in another number, too. Scores. Simpson, 65. DeChambeau, 67. Simpson was impressed by how he got there, too.

“It’s very satisfying knowing, like, I’m not near as long as some of these guys and I’m able to kind of use my skills of distance control and shot shape to kind of pick me back up when I’m 40 yards or 30 yards behind these guys,” he said Thursday.

After 72 holes, Simpson had the lowest number. His ability to get in position to make birdies – and then make them – got him there.

He birdied five of his last seven holes on Sunday to shoot a 7-under 64 and finish at 22-under 262, one shot ahead of Abraham Ancer. Daniel Berger and Tyrrell Hatton were two shots behind, and Sergio Garcia and Joaquin Niemann were three behind.

After 11 holes, Simpson was two strokes out of the lead. Over the next seven, he grabbed it.

“I think it’s a good thing that guys were making birdies because they kind of forced me to be a little more aggressive and know that pars weren’t going to cut it,” Simpson said. “I was only 2-under through 11 holes today for the round and had to make birdies.”

About a half-hour after play resumed after a three-hour delay due to a storm, seven players were tied for the lead at 17-under. Then it rained birdies.

Niemann birdied 15 to move into a share of the lead with Simpson, Hatton and Ancer, and he took the lead outright with a birdie on 16. But he bogeyed the 17th and finished three shots behind Simpson.

Ancer had the lead at various points in the final round, and he shared it with Simpson after his birdie on 15. Berger, the winner last week at the Charles Schwab Challenge, joined them briefly with a chip-in on 17.

There was never a share of the lead again after Simpson’s birdie on 16.

Brooks Koepka finished four shots behind Simpson, and six players, including DeChambeau and Justin Thomas, were five behind.

Dylan Fritelli won the fourth round