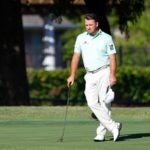 Another PGA Tour player has reportedly withdrawn from this week’s Travelers Championship due to Covid-19, even though he didn’t test positive for the virus himself.

According to Golfweek’s Eamon Lynch, 2010 U.S. Open champion Graeme McDowell has chosen to WD from this week’s PGA Tour event after his caddie tested positive for Covid-19 on Tuesday.

According to the report, the McDowell’s caddie Ken Comboy believes he was infected with the virus a week and a half ago after the Charles Schwab Challenge, when “McDowell’s private plane was too small for his party, so his longtime bagman took a commercial flight to Orlando that he described as ‘packed’ with passengers.”

McDowell and Comboy also detailed to Lynch the chain of events that led to the positive test. Comboy first felt symptoms on Thursday at the RBC Heritage. He and McDowell then drove six hours home to Orlando on Friday after missing the cut. The Tour suggested Comboy take a test after he reported his symptoms.

Comboy didn’t make the trip with McDowell to the Travelers Championship while awaiting his test results. Though McDowell tested negative on Monday, once Comboy’s positive test came in, McDowell decided the safest choice was to not play the tournament and instead head home.

“For the protection of the field and for my own physical and mental well-being, I’m going to take a test tomorrow morning then jump on a private plane,” McDowell told Golfweek. “I’m going to get myself out of here, home to Florida and decide whether I need to quarantine myself from my family.”

Before knowing the results of Comboy’s test, McDowell played a practice round at the Travelers with Brooks Koepka, Chase Koepka and Shane Lowry. Because of that, Koepka and his caddie plan on getting retested for the virus.

It’s not the first case of a Tour pro withdrawing from a tournament due to a positive Covid-19 test, or even the first at the Travelers. Cameron Champ withdrew from the tournament on Tuesday after testing positive, and Nick Watney was forced to withdraw before the second round of last week’s RBC Heritage after also testing positive.