What’s next for the PGA Tour after Nick Watney tests positive for Covid-19? 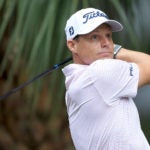 Nick Watney hits a tee shot during Thursday's first round of the RBC Heritage.

Starting with last week’s Charles Schwab Challenge, the PGA Tour is going to play 25 events in 24 cities through the Masters in mid-November. Hundreds of players, caddies and tournament personnel are going to be involved.

Someone was going to get the coronavirus, Rory McIlroy said.

“Look, by the end of the year, there’s going to be 200,000 deaths in the U.S. alone from Covid-19,” McIlroy said. “So to think that us on the PGA Tour, none of us were going to get it was very – I don’t think anyone thought that. I think the consensus was someone is going to get it at some point.”

On Friday, during the second round of the RBC Heritage in Hilton Head, S.C., Nick Watney became the first PGA Tour player to test positive.

That “someone,” the PGA Tour hopes, won’t turn into everyone.

Before the Tour ended its three-month coronavirus hiatus at last week’s Challenge, it developed a testing plan. It developed a “bubble” plan.

It developed a plan should someone test positive.

“The whole plan put in place was, not if, but when somebody tests positive, what’s the protocol, and what are the next steps?” Jordan Spieth said Friday. “So I feel confident, just in being on those phone calls, in what the PGA Tour’s going to do going forward here, and hopefully contact tracing doesn’t lead to anybody else testing positive within the bubble.”

A look at what happened, what’s in place and what’s next

After missing the cut at last week’s Charles Schwab Challenge, Nick Watney traveled from Fort Worth, Texas, to Hilton Head, S.C., for this week’s PGA Tour tournament, the RBC Heritage. When he arrived, he was tested for the coronavirus, and a few hours later, he found out he tested negative. On Wednesday, he played a practice round at Harbour Town Golf Links, and Thursday, he played the first round with Luke List and Vaughn Taylor.

On Friday, Watney began to feel symptoms of the virus and was tested again, then went to the course. He came near Brooks Koepka, the world’s fourth-ranked player, in the parking lot. He talked with Rory McIlroy, the world’s top-ranked player, on the putting green.

Watney was eventually told the second test was positive. He was forced to withdraw from the tournament and will now undergo a 10-day quarantine. The tournament’s third round will still be played.

What were the testing procedures for Watney?

Before the Charles Schwab Challenge, the Tour “strongly recommended” that players get tested before leaving their homes, though it wasn’t enforced. It is unknown if Watney took that test.

At the Charles Schwab and RBC Heritage, Watney was to have immediately reported for testing. He was to have his daily temperature check and was to have to filled in a questionnaire regarding his current health and any potential exposure. He was also to be observed for symptoms.

Every player at the Schwab and Heritage, including Watney, tested negative.

Should Watney have taken the Tour’s tournament charter jet, he would have needed to have taken a Covid-19 saliva test after the third round.

Besides daily testing, the Tour says “any abnormal daily on-site medical screening will be reported to the tournament physician and PGA Tour medical advisor and will require a clinical evaluation in the tournament designated area. Medical personnel will assess the individual and determine appropriate action. This evaluation may include additional Covid-19 testing.”

According to a Tour release on Friday, Watney “indicated he had symptoms consistent with the illness and after consulting with a physician, was administered a test and found to be positive.”

What’s next for Watney?

Under the Tour’s Health and Safety Plan, Watney immediately withdrew from the tournament, and he will self-isolate for at least 10 days. He can end his quarantine after 10 days provided he has no subsequent symptoms or has two negative test results 24 hours apart or more.

The Tour will also provide Watney with a stipend for costs associated with the self-isolation.

He will not receive a paycheck this week. According to the Plan, “any player who competes in a tournament, makes the cut but is then unable to finish due to a Covid-19 positive test will receive last-place unofficial money.”

What is the bubble?

The Tour has recommended that players stay in a Tour-designated hotel, which “will be required to adhere to stringent safety and sanitization protocols.” The Tour said players could also stay in an RV, a rental home “with proper sanitization practices” or their own homes. It is unknown where Watney stayed.

Food is also to be controlled. According to the Tour, players were to “pick up food at drive-throughs, curbside restaurant service or stores. Do not dine in restaurants if that is prohibited by state or local guidance.”

Had Watney gone to a restaurant in Hilton Head, he wouldn’t have been alone.

“South Carolina’s open,” Jordan Spieth said. “If you go anywhere to a restaurant, there’s a lot of people there right now.”

What is contract tracing?

Watney’s first-round playing partners, Luke List and Vaughn Taylor, their caddies and his caddie, Joe Navarro, were to be tested. The Tour will also attempt to find who else Watney came in contact during his time at the tournament.

The PGA Tour’s Participant Resource Guide is limited in describing how this will take place.

“A disinfecting/decontaminating response will be implemented to ensure all possible items and surfaces touched by the infected individual are quickly cleaned,” the Guide says. “Contact tracing and enhanced evaluation of confirmed contacts will be performed by medical personnel.”

Will this tournament – and others – be played?

Saturday’s third round will go on as scheduled.

In March, the Players Championship was canceled after the first round as the coronavirus spread. When the Tour’s Health and Safety Plan was revealed in mid-May, PGA Tour executive Andy Levinson was asked how many positive tests it would take to shut down again.

“There is no specific number that we are focused on,” Levinson said. “When there is a positive test, there does have to be some contact tracing that takes place, which is why social distancing is so important. We haven’t identified a specific number, but obviously if it was a large number then we would have to evaluate the situation.”

What are the players saying?

Those interviewed after Friday’s second round believed the test was inevitable.

Someone was going to test positive.

“Like someone was going to get it eventually,” Sebastian Munoz said. “There’s just too many – like this Island is just – I don’t know, there’s just too many people hanging around. It’s just a pandemic, you know. Like a lot of people get it, and eventually one of us was going to get it. I feel good that we caught it early with one guy so far. So hopefully, it doesn’t rise up pretty quick.”