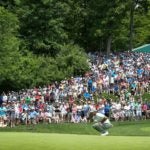 The Memorial tournament will be the first PGA Tour event to host spectators after the coronavirus shutdown.

It’s official, the first post-layoff PGA Tour event that will allow spectators will be the Memorial Tournament in Columbus, Ohio, held July 16-19. The Memorial will follow five weeks of events where spectators are not permitted.

Ohio Governor Mike DeWine made the announcement official Friday afternoon, tweeting that the tournament prepared a safety plan and he intends to approve it. While the announcement does not come as a surprise — the Muirfield Village event has been hoping and planning to host fans — it still needed official word from the governor. Each state is under differing protocols for social distancing.

The number of fans allowed on the grounds remains to be determined. Last month, tournament director Dan Sullivan said that the event had been purposefully limiting the number of ticket sales in advance of a limited number of spectators allowed on site.

The news comes one week after the John Deere Classic was canceled. The JDC was originally pegged as the first event aiming to host spectators, but Illinois state guidelines would have made conducting the event with fans nearly impossible. Instead, Muirfield Village will host a spectator-free event the week before Memorial opens its doors.

Sullivan spoke about the various measures his team is putting in place to keep it as safe as possible for all people on the grounds. That includes no grandstand seating on the property and RFID tags that will alert tournament staff if too many people are gathering in tight quarters. “At any time we can know, around the golf course, how many people are collecting in a certain area,” Sullivan said at the time.

As of Sullivan’s announcement, it was expected that everyone on-site will wear masks and have their temperature taken daily. Other protocols like no fountain drinks offered in concessions are expected to be in place.

“The Memorial presented by Nationwide would like to recognize the successful efforts led by Governor DeWine, Lt. Governor Husted and Dr. Amy Acton in the fight against the spread of COVID-19,” the Memorial Tournament said in a statement. “The State of Ohio has been a leader in identifying the tremendous threat that began to appear in January and was one of the first to take drastic action to curb the spread and reduce deaths.

“Their implemented plan has produced encouraging results and allowed for the slow process of opening the State to business and gradually allowing Ohioans to return to a level of normalcy, including the ability to permit patrons at this year’s Memorial. With the support of the PGA Tour, who the Tournament has worked jointly with throughout this process, the Memorial is looking forward to partnering with State, County and City leadership, along with the Memorial Covid -19 Task Force, to offer the Memorial Tournament presented by Nationwide as an example of how public gathering events can be developed and implemented with approved and accepted protocols in place.”

The tournament said it would issue more details about plans for the event in the next week.