The Match 4: How to watch Phil Mickelson and Tom Brady vs. Bryson DeChambeau and Aaron Rodgers 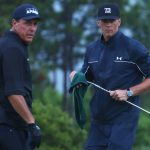 At The Match 4, Phil Mickelson and Tom Brady will try to avenge their loss to Tiger Woods and Peyton Manning in the second playing of the event.

Mike Ehrmann/Getty Images for The Match

The fourth edition of Capital One’s The Match kicks off on Tuesday, July 6, in Montana, and this one is sure to be entertaining, with PGA Tour bombers Phil Mickelson and Bryson DeChambeau mixing it up with star NFL quarterbacks Tom Brady and Aaron Rodgers on the golf course. Here’s everything you need to know to watch The Match 4 live on TV or online.

The Match 4: What you need to know

The first-ever playing of The Match pitted Tiger Woods against Phil Mickelson in a one-on-one grudge match at Shadow Creek in Las Vegas. Since then, the charity exhibition match has revolved around team play, featuring Tour stars sharing the course with celebrity athletes from other pro sports.

The Match 4 will follow in the same vein. Mickelson, the reigning PGA Champion, will reunite with Brady to take on DeChambeau and Rodgers at The Reserve at Moonlight Basin in Big Sky, Mont. Mickelson and Brady previously teamed up in The Match 2. But that didn’t end so well for the pair: they lost to Tiger Woods and Peyton Manning.

It will be the first time DeChambeau, the PGA Tour’s longest hitter, and Rodgers, longtime Green Bay Packers quarterback, participate in the event. Bryson’s prowess on the golf course is well known to even the casual golf fan, but Rodgers is a solid player, too, setting up what should be a fiery competition.

One big difference at this week’s event involves NBA Hall-of-Famer Charles Barkley. Barkley, who played alongside Phil in The Match 3, will hang up his cleats and return to the booth, where he will chatter with his broadcast partners and the players throughout the competition, much like he did at The Match 2.

How to watch The Match 4 on TV

With many Americans enjoying a day off on Monday, July 5, in observance of Independence Day, there will be plenty of people tuning into the action. The best place to watch The Match 4 is on TV, where there will be extensive coverage provided by TNT. The broadcast will begin at 5 p.m. ET on Monday, and it will be simulcast on TBS and truTV.

How to stream The Match 4 online

2021 Fortinet Championship live coverage: How to watch Thursday's first round