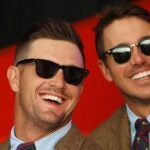 Bryson DeChambeau and Brooks Koepka during the opening ceremonies for this year's Ryder Cup.

After complaints of slow play, after a dig at abs, after a crack about fire ants, after the eye roll seen ’round the world, after Brooksie and beers, after caddie splits and driver mishits, after a Ryder Cup hug — whew, that’s a lot — the Bryson DeChambeau-Brooks Koepka brouhaha comes down to this:

After nearly three years of sniping at each other, the two will go one-on-one in the fifth edition of The Match, to be played on Friday at the Wynn Golf Club in Las Vegas. Here’s how you can watch.

The 12-hole, match-play event will begin at 4 p.m. ET Friday and will be shown on four channels — TNT, TBS, truTV and HLN. On the broadcast will be announcer Brian Anderson, on-course reporter Amanda Balionis and two previous players in the event — NBA Hall of Famer Charles Barkley, who played in the third match, last November; and Phil Mickelson, who played in the first four matches, including the first, which was the last version to be played both one-on-one (Mickelson vs. Tiger Woods) and in Las Vegas (at Shadow Creek Golf Club).

In a matchup that has featured jab after jab, the Fight Capital of the World makes for a proper host.

How to bet on the Brooks vs. Bryson Match

Looking to make a (legal!) wager yourself? We teamed with BetMGM, and the online sportsbook is offering special promotion for the Brooks vs. Bryson Match: get $2 in free bets for every birdie your player makes in The Match when you bet $50+ on Brooks or Bryson to win. Sign up for an account to get into the action today.