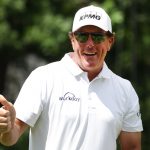 Phil Mickelson on Friday on the 9th hole at Detroit Golf Club.

Phil Mickelson, before teeing off on the 17th hole at Detroit Golf Club on Friday, waited a few extra seconds while a family of ducks waddled from the right side of the tee box to the left. He and Rickie Fowler, his second-round playing partner at the Rocket Mortgage Classic, even gently escorted the foursome from behind. “Phil just getting his ducks in a row,” cracked analyst Trevor Immelman on the Golf Channel broadcast.

That was one kind act.

On Thursday, the six-time major champion had hinted that his first appearance at the Rocket Mortgage would also be his last after he took issue with the timing of a Detroit News story that reported that a noted Detroit bookie testified in 2007 that he placed one or more large bets on Mickelson’s behalf but was unable to pay the $500,000 he owed afterward. “I’m disappointed they would curiously pick this week to write an article about a bet that was made over 20 years ago and a jury trial that took place in 2007, where the guy who was convicted is dead and where the only purpose for this article is to embarrass Phil Mickelson,” Mickelson’s lawyer, Glenn Cohen, told ESPN.

On Friday, after Mickelson birdied that 17th hole to make the cut on the number, said he would return for more than this weekend — on two conditions.

“You know, the people were awesome. They were so nice,” Mickelson said. “So I would say — I would say this: I don’t want to be divisive. I didn’t like the way that felt with the reporter. The people here were so nice that I’ll make a deal with them. There’s a guy named Mike Sullivan that’s trying to raise 50,000 signatures. If all — if he gets 50,000 and all of those 50,000 agree to do one random act of kindness for another member of the community, I’m in.

“I just think that this tournament has sponsors, from Rocket Mortgage to a lot of the local sponsors to a lot of the people in the community, that are trying to come together and do something good for the community. If the members of the community will come together, I would love to be back, but what I won’t tolerate is that kind of divisive attitude from that particular reporter. It’s just not helpful to anybody in any way.”

Though only halfway done, Mickelson’s Mortgage Classic has been eventful. The Detroit News story published Tuesday night. On Wednesday, Mickelson played a practice round with Bryson DeChambeau, one of his opponents next week in the latest edition of the Match — and Thursday, DeChambeau said he and his longtime caddie, Tim Tucker, were splitting up. On Friday, Mickelson’s other early round playing partner, Masters champ Hideki Matsuyama, was forced to withdraw from the tournament after he tested positive for Covid-19. (Mickelson and Fowler were cleared to continue.)

And Mickelson played golf, too.

On 18, fans were five deep watching the 51-year-old. Whether they will next year is up to them.

“I think that it shows what an incredible community this is the way people come together to support, whether it’s me or this tournament or the other players or hopefully the members of the community, too,” Mickelson said. “That’s what this is about, that’s what we’re trying to do here using sport as the engine.

“So I was very impressed and appreciative of the way everybody was today. I hope that this tournament continues to bring that type of community involvement and bring them together, and if that happens, like I’d love to be a part of it because I thought it was really cool.”