‘Like a fight or flight scenario:’ Why is Bryson DeChambeau so spirited before drives? 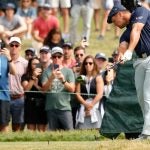 Bryson DeChambeau hits his drive on Saturday on the 15th hole at Torrey Pines.

Bryson DeChambeau will pace around. He’ll bob up and down. He’ll breathe rapidly, then exhale forcefully. DeChambeau is playing golf, but it’s worth checking:

Everything OK there, Bryson?

“Yeah, it’s a lot of adrenaline stuff, trying to get my body in the right place,” DeChambeau said.

Ahead of each of his drives at this week’s U.S. Open, and most every one of his PGA Tour-distance-leading tee shots, DeChambeau winds himself up. Then the alarm goes off, and he goes to work. He’s averaging 336.6 yards per drive at Torrey Pines, where he was two strokes behind of the lead entering Sunday’s final round.

“It’s about feeling it correctly, and then it’s also about amping myself up, like [breathing], get myself moving and going to create a lot of blood flow that allows me to hit it hard,” DeChambeau said Saturday. “Because I’m just static over it and just staying there, you see a lot of the long drive guys doing that. So it’s tough to fully employ it out here in Tour event golf, or major championship golf for that matter, but I try and implement a little bit of what the long drive guys do, and it’s not the full-blown thing, but it’s still a little bit.”

Perhaps no DeChambeau drive this year was more animated than his 370-yard poke during the third round of the Arnold Palmer Invitational. He carried it 340 yards over a lake on the 531-yard, par-5 6th, cutting the corner on the dogleg hole, and he was left with about 70 yards to the hole. There, too, he took two practice swings behind the ball, took a deep exhale and took a few waggles of his driver next to the ball. Then swung.

“You have to get yourself amped up a little bit,” DeChambeau said on a video released by the PGA Tour before the Arnold Palmer. “You have to walk around a little faster and get some blood pumping. A lot of breathing. Breathing actually helps quite a bit. More oxygen you get in, the more blood flow you get, greater adrenaline you can pump. Kind of like a fight or flight scenario so if I’m really pumping this, I’m really going to get into it.”

5 tips for having a good pre-shot routine, according to a Top 100 Teacher