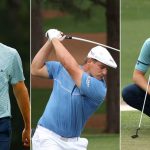 Who will emerge as the best storyline at the Masters this weekend?

The 2021 Masters is already at the halfway point, and by the looks of things, we’re in for a very exciting weekend of golf. Here’s everything you need to know for Saturday’s third round at Augusta National.

1. The leaderboard is tightening

Justin Rose enjoyed an incredible four-shot lead after firing an opening round of 65 on Thursday, but a second-round 72 evened things out a bit. Rose’s advantage is now only one shot over young gun Will Zalatoris, a 24-year-old who is making his Masters debut. Rose and Zalatoris will play together in Saturday’s final pairing at 2:20 p.m. ET.

You can find complete Round 3 tee times here.

2. Si Woo Kim will (presumably) have his putter back

Si Woo Kim experienced a moment of frustration on the par-5 15th hole on Friday, and slammed his putter down into the fringe just off the green.

Unfortunately, the force was such that his putter was rendered unusable afterward. What then? Putt with the next best thing in the bag: a 3-wood.

Somewhat incredibly, Kim managed to par out on his remaining holes, even without his putter. Though the Rules of Golf prohibited Kim from replacing his putter during the round because he was the cause of the damage, he will be able to sub in a new one for Saturday’s third round, which he will begin only three shots behind Rose’s lead.

Jordan Spieth, fresh off his first victory in nearly four years at last week’s Valero Texas Open, made up some ground on Friday, firing a second round of four-under-par 68, bringing him within two shots of Rose’s lead into a tie for fourth. Spieth made five birdies and one bogey on Friday, and will play in the third-to-last pairing on Saturday, alongside Bernd Weisberger.

4. Bryson DeChambeau is back in the mix!

After a disappointing opening round of four-over 76, DeChambeau’s critics were out in full force. But he quieted the noise on Friday with a sizzling five-under 67, which included seven birdies and two bogeys, and launched him from the brink of the cutline into — dare we say — contention. DeChambeau is one under overall, and only six shots behind Rose’s lead.

5. DJ, Brooks, Rory among notables to miss the cut

Augusta wasn’t kind to some tournament favorites, as Dustin Johnson, Brooks Koepka and Rory McIlroy will be among those who were four over par or worse after 36 holes and will be heading home early. The missed cut marked unfortunate career milestones for each of the three top players.

Saturday morning is expected to be pretty mild, with partly cloudy skies and temperatures rising from a low of 62 degrees to a high of 83 degrees by 4 p.m. local time. The wind is forecast to pick up beginning at around 11 a.m. local time, with gusts of up to 14 mph expected. There’s also a chance of thunderstorms for the late-afternoon tee times, beginning at 5 p.m. local time.

To name a few: After numerous close calls — including a heartbreaking playoff loss to Sergio Garcia in 2017 — Justin Rose rallies to claim his first green jacket and second career major.

Twenty-four-year-old youngster Will Zalatoris becomes only the second player in Masters history to win in his first appearance.

The list goes on! But let’s face it — the weekend at the Masters is second to none, regardless of the storyline that emerges. And that alone makes Saturday worth tuning in.