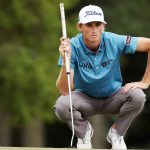 Just two years ago, Will Zalatoris had no status on any major tour.

Will Zalatoris can remember the exact moment he started dreaming of competing in the Masters.

It was April of 2005, and the 8-year-old Zalatoris was sitting in the Italian restaurant Vivace in the San Fransisco Bay Area with his family. On the televisions in the dining area, Tiger Woods stepped up to his ball that had settled just to the left of the par-3 16th green at Augusta National.

He was deadlocked in a back-nine battle with Chris DiMarco, and he needed to do something special with his upcoming pitch. What happened next has been replayed time and time again and will go down as one of the greatest shots in Masters history.

Back in California, the restaurant Zalatoris was eating in erupted in cheers.

“Normally the restaurant was pretty quiet,” Zalatoris remembers. “[But] when that ball dropped, it got pretty loud … That was probably [when] I knew, really realizing how special the Masters is.”

Seventeen years later, Zalatoris is living out that dream of competing at Augusta National. And not only that, he’s in contention, sitting T2 through 36 holes and just one shot back of Justin Rose’s lead.

Out of all the players in the field, Zalatoris might be the unlikeliest of them to be in contention — but not because of his talent. It’s been apparent that the 24-year-old is an outstanding player for quite some time. From his win at the 2014 U.S. Junior Amateur to earning All-American honors at Wake Forest, it’s always been clear he’s had game. But his path to the top tier of the sport has not been quite so conventional.

Zalatoris elected to leave school early in 2019 to pursue professional golf, but there was one problem: he had no status on any major tour. So, he went to work Monday qualifying.

He parlayed his Monday qualifying success into special temporary membership on the Korn Ferry Tour in 2019 and, even then, he was sure his best golf was yet to come.

“I know that I’m good enough that I’ve won at every level,” he said at the time. “I know that eventually I’ll win here, it’s just a matter of time.”

His predication proved true. During his sophomore KFT season, Zalatoris transformed himself into one of the hottest players on the planet. During the 2020 season, he made 16 starts on the development circuit. He earned 10 top-10 finishes, 14 top 25s and registered his first career victory at the TPC Colorado Championship.

Still, his best golf was yet to come.

Zalatoris’ biggest breakthrough came at last fall’s U.S. Open as he put on a ball-striking clinic at Winged Foot on his way to a T6 finish. His performance finally put him on the national media’s radar and showcased just the kind of player he could be.

“Winged Foot was incredible,” Zalatoris said after the U.S. Open. “[But] I can’t say I’m not surprised with a T6 finish in the U.S. Open.”

He might not have been surprised, but Zalatoris’ trajectory comes as a revelation to others, if only for the lack of precedent. It’s not often that a player bypasses Q school and not only makes it to the PGA Tour, but places himself at the top of the Masters leaderboard (and all within 24 months of beginning the journey). But Zalatoris has done just that.

This week at Augusta National has been a repeat performance of the impressive ball striking he showcased at Winged Foot. Every iron seems to be pure, and it feels like he never misses a fairway. His putter is heating up, too.

Through 36 holes, Zalatoris has carded eight birdies and an eagle at Augusta National, and he’s only dropped four shots. His 70-68 start puts him just one shot off Justin Rose’s lead in his first career start at the Masters. His name might be the biggest surprise on the first page of the leaderboard.

Now as the cut is made and the pressure ramps up at Augusta National, everything changes. Each shot carries more importance and every decision will be scrutinized. But if Zalatoris’ candidness throughout this week is any indication, don’t expect the moment to be too big for him.

“I’ve wanted to be here forever,” he said. “There’s no reason to feel intimidated now.”