The 6th bites back: How one Augusta National par-3 became a brutal beast, at least for a day 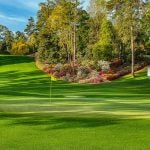 The 6th green wasn't so friendly on Friday.

AUGUSTA, Ga. — When patrons rush the course every morning of the Masters, a large troop heads to Amen Corner. We get it. They set their chairs up along the ropes because that’s where they wanna watch the golf.

Others choose the 16th hole or maybe 15, where all the magic happens. But when Nancy Lopez, LPGA legend, chooses to plant her home base for the day, it’s right behind the 6th green. Lopez and her husband do so every year, and during some years, every single day. It’s a meeting place with one friend, a gallery guard stationed at the 6th, but that’s not all.

You can say that about all the holes at Augusta National, but during Friday’s second round, the 6th have been the best hole. It was that good.

Normally the 13th-toughest, Juniper — an 181-yard downhill par-3 — played as the second-toughest on Friday, a preposterous change brought on entirely by pin placement. Sixteen steps on and eight off the right is where the cup was placed. That might not mean anything on paper, but on the turf it means dangerously close to a massive knob in the center of the green. Our leader Justin Rose hates that knob right now. His approach careened off it and left him 80 feet for birdie. Like a scene straight out of any Pirate’s Cove Adventure Golf, his first rolled up and then down again. Everyone, with every shot at the 6ths, is worried about that knob. Lopez repeated herself multiple times: “Three [strokes] is a birdie today.”

Three strokes certainly gained traction on the field. The 6th played to an average of 3.307, topped in difficulty only by its predecessor, the 5th, which always plays that way. For context, the 6th played toughest in 1946, when the average score was 3.269.

Unless you watched a bunch of groups come through, like Lopez did, it was difficult to know which aspect of it was most confusing. The table-top landing zone? The wicked contour of the green? The wind direction on the tee or the change in elevation? The general consensus was it was playing seven yards off the number, so 174. Carrying the knob, though, called for 171. Too far is no good, either. Jim Herman flew his 188, leaving one hellish chip. He made bogey.

Mostly the field selected 7- or 8-irons, but a handful muscled up on a 9. Then came Bryson DeChambeau, making birdie with a pitching wedge. Five groups later, Ian Woosnam flirted with the pin using his 6-iron and three-putted back down the hill for a 4. Twenty minutes after that, Bernhard Langer backed off a 6 and smoothed a 5. Of course it went long. Bogey.

“It’s one club,” Lopez said. “It’s gotta be that one club. It’s either the exact right club or it’s easily the wrong club.”

Don’t let that brain teaser get you dizzy. The truth is, there was about eight yards of depth on which to land approaches to the traditional second-round pin, which has only gotten tougher through the years. It used to be one step farther to the right (where it’s flatter) and one step farther on (flatter yet). But the way the modern game has progressed, the ball flies faster, the clubs hit higher, and the players swing harder. Spin, spin, spin is all they’re after for shots like the 6th. They’d love for it to hit and stop, just like it did in November. This April, things aren’t so kind.

But with that high-spinning play comes one all too important guessing game with the wind, and no one knows it better than Bruce Knapp, the 6th-hole spotter for CBS Sports. Knapp watched every shot into the 6th on Friday, as he has done for years, communicating club selections to the broadcast.

“They’ll see the flag doing nothing,” he said. “And then they’ll look up at the top of the trees doing something else.” It’s mental gymnastics of what matters most, what matters least, and what doesn’t matter at all. So it was understandable when Stewart Cink and his son/caddie spent nearly three minutes discussing the wind direction. Better to focus on that than the two bogeys and a double from the group ahead.

Hudson Swafford’s double bogey was the last one Lopez needed to see. Like most golf fans, she enjoys a touch of the carnage — “it’s nice to see them struggle a little” — but eventually enough is enough. She wanted to see some birdies (only six were made there all day), and left with one final thought: “Even in my heyday, I wouldn’t have wanted anything to do with this.”