Here we go again: The Jordan Spieth you remember is contending at the Masters 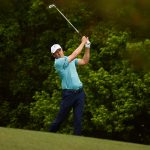 Jordan Spieth surged into contention on Friday at the Masters.

AUGUSTA, Ga. — If you think watching Jordan Spieth play golf is an emotionally taxing endeavor, imagine how it must feel to share a last name with him.

On Friday, the 27-year-old vaulted himself into a tie for fourth at the Masters following a second-round 68 that harkened back to the Jordan Spieth of old. The three-time major champion hit 11 of 14 fairways and 14 of 18 greens, recording only a single bogey to five birdies. He enters the weekend at five under, two strokes back of Justin Rose, the 36-hole leader.

“I’m in position now to think [I can win], for sure,” Spieth said. “At the halfway point, I would have been pleased with being two back if that’s where I’m at, especially after last week.”

A weekend in contention at the Masters should be welcome news to team Spieth. A dozen or so — family, friends and more — walked with him on Friday. Spieth’s wife Annie was at the heart of the group, sometimes straining over crowds on her tippy toes to catch a glimpse of the action.

Spieth’s inner circle has lived every minute of his roller-coaster last half-decade with him. But if the good vibes from Sunday’s win at the Valero Texas Open were still rolling at Augusta National, the Spieth clan was keeping its excitement close to the vest. The group darted through the rough and into position ahead of Spieth with startling efficiency, often sharing little more than nods and fist bumps. Many times, during the action, words were left unanswered. Analysis for those game to listen, but not for anyone in particular.

“The greens are better today,” one offered.

“I’m so nervous,” another said.

The group’s collective focus was admirable, and it only intensified as Spieth entered Amen Corner. Still, they never cracked, even when Spieth bogeyed the 12th and wound up in trouble on 13. But ultimately their persistence was rewarded. Spieth hit a brilliant wood from the pine straw on 13 to the fairway right of the green before getting up-and-down for birdie. On the 15th, where Spieth chipped in for eagle Thursday, his ball checked at the last possible moment on the back shelf just off the green. Two putts later, he walked away with another impressive birdie.

“I think putting it from past the green on 15 was a little nicer than that chip yesterday, even though the chip happened to go in,” Spieth said. “It was a lot less stressful putting it from there down to a foot versus a chip would have gone in the water.”

In his opening press conference Monday, Spieth referenced “blocking out the noise,” a nod to New England Patriots head coach Bill Belichick. On Friday, Spieth saw some of the largest crowds in two years — the closest anything has looked to a traditional gallery this week. But the 2015 green-jacket winner has grown comfortable navigating in the spotlight at Augusta National, even if his game hasn’t always followed suit.

“I think I actually play maybe even a little more aggressively now than I did then,” he said. “It really just depends on the course. There’s certain pins where we’re like, okay, this is where we’re trying to be in two. The left pin on 2, I’m not trying to get it on the green because it’s a harder two-putt from the back right than it is chipping from 50 yards right of the green.  There’s just certain pins where we start to make adjustments.”

Heading in to Saturday, Spieth finds himself in unusual position at the Masters. He led wire-to-wire in his victory in 2015, and was on track to do so again in 2016 until disaster struck on Sunday. This weekend, he looks to grab his second green jacket — not by overpowering the field, but by outthinking it.

“I’m happy that the golf course has the opportunity to play more and more difficult over the weekend,” Spieth said. “I think that personally I’m looking forward to that kind of challenge, and I think that could be an advantage to me if I’m in control of the ball.”