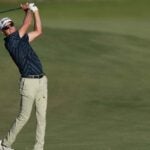 Martin Laird bounced back from a 72nd hole birdie to win the Shriners Hospitals for Children Open.

For the first time in over seven years, Martin Laird is a winner on the PGA Tour.

The Scotsman won the Shriners Hospitals for Children Open on Sunday, birdieing the second playoff hole to prevail over Austin Cook and Matthew Wolff. Laird’s win is his fourth on Tour, and the second at the Shriners.

“It’s been a while,” Laird said. “I love it here. … Obviously I’m going to really enjoy this one.”

Coming into the week, Laird’s game was anything but in form. He’d played in only three events since March due to left knee surgery, and his last top-10 finish was at the opposite-field Puerto Rico Open in February. With his limited play of late and lack of form, he was not exempt into the field this week and had to rely on a sponsor exemption for his start. He took full advantage of the opportunity.

Laird began the day tied for the lead and held his position near the top of the leaderboard throughout Sunday. He made two birdies and a ridiculous eagle on the 9th as he looked for the win that has eluded him for so many years, but a bogey on the 10th cast some doubt if he could close the deal.

The next seven holes were solid for Laird as he made five pars and two birdies, and he stepped onto the 18th tee box with a one-shot lead. However, he was unable to finish the job in regulation, as he missed the green right and failed to get up-and-down, opening the door for Cook and Wolff.

The playoff started with players matching pars on the 18th, so they headed to the 17th to decide the tournament. All three players hit the green on the par 3, but only Laird was able to capitalize as he curled in his swinging 23-footer for birdie.

With the win, Laird gains entry into the 2021 Tournament of Champions, Masters and PGA Championship. He also earns 500 FedEx Cup points as he moves to fourth in the FedEx Cup standings.

“As you can tell, it’s emotional,” he said. “I can’t wait to get back and see my kids and my wife and celebrate with them.”