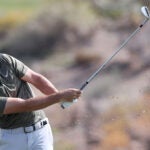 Matthew Wolff hits his second shot on the 18th hole at TPC Summerlin on Saturday.

Matthew Wolff had just made three eagles over five holes on the back nine at TPC Summerlin. He had just shot an 8-under 28 on that back nine. And a 10-under 61 overall. He had just grabbed the clubhouse lead during Saturday’s third round of the Shriners Hospitals for Children Open.

He was still on fire in the interview tent.

Talk me through the three eagles, the reporter asked.

Five holes. Six-under. In between the three eagles, he made two pars.

According to the PGA Tour, Wolff became the fifth player since 1983 to make three eagles on either a front or back nine in a round. And the first since 2006. The others: Jason Gore in 2006 at the John Deere Classic; Arjun Atwal in 2006 at the Farmers Insurance Open; Tag Ridings in 2005 at the American Express; and Willie Wood in 1990 at the AT&T Pebble Beach Pro-Am.

“I think this course just you have so many birdie opportunities if you hit the ball in the fairway,” Wolff said. “It’s not long. The pins were in pretty favorable spots.

“I just told myself to give myself as many looks as I can, and the putts would fall. Even though it seems like some of them didn’t, I hit the ball really well.”

After his third eagle, Wolff needed to finish 3-under for a 59.

“I think after I missed that putt on 17, the one that I thought just kind of broke right and didn’t go in, I kind of realized – I thought back and I go, ‘Dang, if that putt would’ve went in, all I would’ve had to do is birdie 18 to shoot 59.’”

Three weeks ago, Wolff led after the third round of the U.S. Open, only to shoot a final-round 75 and finish second to Bryson DeChambeau.

He said he felt brutal for “maybe like 10 minutes after I finished up.”

“I felt like that was honestly more of a learning experience and more confidence,” Wolff said.