Tour Confidential: Are PGA Tour bombers taking the skill out of the game? 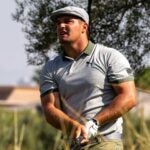 Bryson DeChambeau hits his tee shot on the 9th hole at TPC Summerlin on Friday.

Check in every week for the unfiltered opinions of our writers and editors as they break down the hottest topics in the sport, and join the conversation by tweeting us @golf_com. This week, we discuss Matthew Fitzpatrick’s comments on Bryson DeChambeau, the KPMG Women’s PGA Championship and more.

1. After bulking up earlier this year, Bryson DeChambeau has turned the game on its head by overpowering Tour setups with huge drives and aggressive lines. On Friday, one of DeChambeau’s peers fired back. “It’s not a skill to hit the ball a long way in my opinion,” 5-foot-10, 155-pound Englishman Matt Fitzpatrick said from the BMW PGA Championship. “I could put on 40 pounds. I could go and see a biomechanist, and I could gain 40 yards; that’s actually a fact. I could put another two inches on my driver. I could gain that. But the skill in my opinion is to hit the ball straight. That’s the skill. He’s just taking the skill out of it, in my opinion. I’m sure lots will disagree. It’s just daft.” DeChambeau, who was playing on the other side of the pond, at the Shriners, responded, saying: “I feel like I’ve started to go down a path that’s allowed me to have an advantage over everyone, and I think that is a skillset when you look at it. For me out there today, I was still able to hit a lot of fairways at 360 yards. That’s tough to do with drivers. … I think it takes a little bit more skill to do what I’m doing, and that’s why there are only a few people doing it out here.” Any truth in what Fitzpatrick is saying? Is DeChambeau — or Tour bombers in general — taking some of the skill out of the game?

Michael Bamberger, senior writer: The goal, of course, is to play a round in the fewest strokes possible. I like what Fitzpatrick is saying. It’s charming. Charm died in golf a long time ago.

Josh Sens, senior writer (@JoshSens): Fitzpatrick’s frustration is understandable, but laying the blame on DeChambeau doesn’t feel right. Bryson is simply taking advantage of what the modern game allows. What he’s doing absolutely IS a skill. Is it as interesting – or, as Michael puts it, as “charming” – a skill as someone shaping their way around the course with all sorts of creative shots? I’d say no.

James Colgan, assistant editor (@jamescolgan26): If it’s such a significant leg up, why isn’t Fitzpatrick bulking up himself? Probably because it requires extreme effort and risk — and Fitzpatrick has decided he can be very good at golf without incurring those two things. Bryson has earned an advantage for himself. Who the heck cares if it requires less skill?

Zephyr Melton, assistant editor (@zephyrmelton): The thing Fitzpatrick fails to note is that there is so much more to Bryson’s game than just the long ball. After coming back from golf’s stoppage, he was one of the best putters on Tour. Long drives + hot putting is a lethal combo. Also, since when was hitting the ball a long way not a skill? Fitzpatrick comes off a bit whiny here. In the wise words of J.T. Poston, “play better.”

Sens: Water. Doglegs. Firm greens. Tough pins. All of the above. But I agree with Michael on length. That’s not going to be the answer.

Colgan: Did Bryson not just dismantle golf’s most penal conditions? I think the setup answer is to add more risk (water, hazards, etc.), not more punishment.

Melton: The Tour willingly making course setups harder? I’ll believe it when I see it.

3. The third of four 2020 LPGA majors, the KPMG Women’s PGA Championship, is in the books. Sei Young Kim claimed her first major title with a sensational Sunday 63; the host site, Aronimink GC, was widely praised; and tournament organizers got creative (and smart) with final-round starting times to give the leaders more TV exposure. What’s your primary takeaway from the week?

Bamberger: Saw women’s golf up-close on a hard course for the first time in a long time, and it was spectacular. The PGA of America knows how to set up a course. The women were great to watch and interview. Just a wonderful tournament.

Colgan: I loved — and I mean loved — the PGA of America’s decision to alter tee times in order to get the leaders playing throughout the entirety of the broadcast window. For better or worse, women’s golf gets only a few opportunities a year to make a serious impression on the golf audience. If it added even one more set of eyes to the tournament, it was a smart decision.

Melton: Second what Bambi said. Seeing the women play on such a difficult course was terrific. I love getting to see the ladies on the same classic courses the men have played for years. I was impressed from top to bottom. Top-notch event.

4. Our Michael Bamberger, on site at the Women’s PGA, reported that the pursuit of speed and distance that has consumed many PGA Tour players does not appear to be much of a priority on the LPGA. What do you think — is there an opportunity for an LPGA player to try to go the Bryson route and overpower LPGA setups?

Bamberger: There is. Annika remade her body in mid-career and went from average to below average in length off the tee to well above average. For Michelle Wie and Laura Davies, their games began with their length. I saw women really swinging just flatout HARD, something you don’t see much in women’s golf. There will be more of that in the future, not less.

Sens: Absolutely. The women’s game, like the men’s game, keeps getting more athletic. And  length is always an advantage, not limited to men.

Melton: I think it’s certainly in the realm of possibility, but I’m not sure the total-body transformation is in the cards. As Stacy Lewis noted, women put on weight in different ways than men, and that fact makes a Bryson-esque bulk up unlikely. But I can definitely see a long-hitter making a name for herself. Bianca Pagdanganan, anyone?

5. On the latest episode of Subpar, Jordan Spieth, who hasn’t won since 2017 Open Championship and has slipped to 75th in the world, said that he’s still in a good mental space, because he always leans on his past successes. “When my swing or my mechanics get off, now I can look back at the blueprint of what was so successful back then and what’s different now and map that blueprint, and if and when I am able to map that blueprint, which is what I’m working towards now, it should be pretty much the exact same,” he said. What do make of this strategy? Should Spieth be trying to get back to where he was, or blaze a new/different path forward?

Bamberger: That ship has sailed. In golf, as in life, you can learn from the past but not repeat it. He is not the same person or golfer he was when he won those majors. He doesn’t have to blaze a new path. He has to take pieces from where he’s been and carry on, if that’s what he wants.

Sens: I was thinking something similar. You can’t go back to the garden. Spieth himself has talked about the free-wheeling way he used to play the game. No overthinking. It all seemed fun and easy. He just flipped a switch and off he went. That was then. Rather than trying to recapture what was, it seems he’d be better off taking a page from Tiger and focus more on finding new ways to win.

Colgan: A “feel” player focusing THAT much on mechanics is a bit concerning, even if there have been worse ideas than a three-time major champion venturing back down the path of past successes.

Melton: It feels like he needs a total reset. Something has changed in Spieth since 2017, and most of it seems to be between the ears. I’m confident he’ll win again, but the process of getting back to the top is anyone’s guess.

6. Brace yourselves, people. Tyrrell Hatton won the BMW PGA Championship on Sunday in … a hoodie, a fashion choice that ignited fierce debate on Golf Twitter and beyond. “People are split – they don’t know if they like it or not,” Hatton said. “But I think it’s a cool thing that people are talking about it – they should be open to the idea of creating a more open sport rather than being kind of snobby.” Important question here, Tour Confidentialists, so please don’t rush your answers: Is the hoodie golf-appropriate?

Bamberger: If you’re wearing it hood up between shots on a cold day, maybe. Maybe. I prefer a ski hat bought in desperation in the pro shop minutes before you are due on the first tee. All the better courses in Scotland have them, in all the latest colors: blue, green, gray, black.

Sens: Only if you’re Bill Belichick. Nah. Seriously. You wanna wear a hoodie? Knock yourself out. Seems like it would be distracting mid-swing, though.

Colgan: I can’t fathom many golf arguments worse than the one against hoodies. If you’re comfortable and presentable, why on EARTH should it matter if it has a hood or not?

Melton: I’m as pro-hoodie as they come. In fact, wear whatever the hell you want. Golf needs to be more inclusive, not less. If you want to wear a hoodie, go right ahead. Just make sure your pace of play is quick and you’re fine in my book.