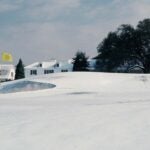 Snow on the 9th green at Augusta National in 1989.

With the Masters being played in November this year as opposed to its traditional April spot on the schedule, golf fans will get a rare glimpse of Augusta National dressed In fall colors. Spring pinks and whites will be absent as autumnal reds and orange take their place. It will truly be a once-in-a-lifetime look at a venue that is shrouded in privacy, save for one week each year.

The weather in November will be a bit chillier than it is in April, with average temperatures in Augusta around seven degrees cooler at that time of the year. Those cooler temperatures will make the course play longer than your average Masters, so there will be some adjustments that need to be made from the players who’ve seen the course in the same conditions for many years.

Save for some cool mornings, the weather should cooperate for this unique edition of the Masters. But, believe it or not, there have been times when the weather hasn’t been so warm and pleasant on the grounds of Augusta National. While at times it can seem that the club is in its own insulated bubble, it is still subject to the whims of mother nature, including rain, wind, sleet and even snow.

On a recent deep dive on Getty Images, I stumbled across some photos of Augusta National blanketed in snow from 1989. The scenes look like they’re straight out of Narnia — too good to be true. Check out the whole gallery below.

There (likely) won’t be any scenes like this at the Masters this year, but if there was any snow, we’d be sure to see a fair amount of players with a snowman or two on their card.

Tom Doak reveals his top 10 overlooked courses in the U.S.