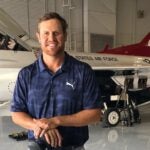 In golf, as in life, perspective can greatly influence your attitude and overall performance. Kyle Westmoreland, an Air Force Academy graduate who’s currently navigating the world of professional golf, has a unique perspective on both golf and life.

I wanted to learn more about his backstory and outlook, and also understand how a military man could possibly have enough time to ready his golf game to compete professionally.

Ahead of the 2021 Shriners Children’s Open at TPC Summerlin in Las Vegas, Westmoreland’s team invited me to join him for a Volition America x Puma photo shoot on the nearby Nellis Air Force Base. Volition America donates a portion of its profits to the Folds of Honor, a foundation that provides educational scholarships to the families of fallen soldiers, and Westmoreland wears the Puma x Volition America apparel proudly.

Westmoreland received a sponsor’s invite to play in the Shriners Open, and he also recently made history at the 2021 U.S. Open at Torrey Pines, becoming the first ever Air Force Academy graduate to qualify for the event. The now 27-year-old turned pro after serving five-and-a-half years of active duty for the Air Force.

While at the Nellis base – between poses in front of the Thunderbirds F-16 fighter jets – Westmoreland was able to catch up with his buddies who are currently serving in the military and stationed in Las Vegas. Some of them also happened to be his former golf teammates at the Air Force Academy.

After a tour of the base, and watching fighter jets lift off from the runway (with ear plugs in to block the incredibly loud noise), Westmoreland sat down with me for a guest spot on GOLF’s Fully Equipped podcast.

Typically, our Fully Equipped podcast focuses on golf equipment industry news, club reviews and gear education. For this interview, though, we dove into the backstory of Westmoreland, his experiences in the military, his transition into professional golf after serving active duty, what he’s learned along the way, and, OK, maybe a little about golf equipment, too.

Here are 5 things about life, golf and equipment I learned from my sit down with Westmoreland.

1) Build a supportive team around you

Rarely does Westmoreland use the word “I.” As a military man, he values the team he has around him – whether it’s his fellow Air Force members, lieutenants, sponsors, golf coaches, or wife. He knows the job can’t be done alone, and he doesn’t take credit as an individual.

If he had it his way, actually, Westmoreland says he wouldn’t even have his name stitched onto his PXG staff bag. To show his gratitude for his team, though, Westmoreland displays military badges from various Air Force members and military squadrons.

For regular citizen golfers, there’s an important lesson that can be learned here. While golf is an individual sport, it’s important to keep a supportive team around you to help you meet your goals.

Golf can be confusing and frustrating, but you don’t have to go at it alone. Seek assistance from golf instructors, professional equipment fitters and fitness specialists who can help you improve and want to see you succeed. You might be the one who has to execute the shots, but surround yourself with positive people who understand your goals and want to help you achieve them.

2) Take advantage of every practice opportunity

Between graduating from the Air Force Academy and turning professional, Westmoreland served in the military for half a decade while most of his current contemporaries in pro golf were honing their games.

How did he stay sharp enough to compete?

He practiced with a purpose and capitalized on every opportunity he could. While he did have access to a golf course on the base, other duties always came first (obviously). That left Westmoreland to work on his short game at night in his room, or on the practice green.

His go-to putting drill was to putt on a ruler. This helps with alignment, stroke path, and getting the ball rolling on your intended line. To perform the drill, simply setup a ruler (preferably a yardstick for it’s longer length), on a flat surface. Place a golf ball on one end, and putt along the ruler so the golf ball stays on the surface without rolling off the side. Even when you can’t get to a golf course, you can still work on your putting nearly anywhere.

3) Golf doesn’t have to be stressful

Sometimes golf can make you want to snap a golf club over your knee, or hang up your sticks altogether. But it doesn’t have to be a stressor, it can be a stress reliever.

For Westmoreland’s buddies in the military – they go by “Sticks,” “Thunder” and “Dog” – golf is an outlet for enjoyment away from their stressful day jobs.

“They don’t play very often…but when they get out there they still hit it good somehow,” Westmoreland said on Fully Equipped. “It gives me hope. I go through a few days not hitting it well I’m like, uh, what’s going on. But they play three times a year; enjoying golf has become a great pastime of theirs and it blows off steam. They live in a high-stress world and a lot of people say golf can be stressful, but I think they handle it well and use golf as an outlet so golf’s not stressful for them.”

Just remember, even if you’re playing the worst round of your life, at least you’re out playing golf.

Westmoreland has serious speed off the tee, saying he tops out at 206 mph of ball speed with his driver. That’s Bryson DeChambeau long-drive type numbers.

He knows, however, that hitting fairways can be equally as important to his scores as hitting it deep. That’s why he has three different shots, and he rarely if ever hits it at 100 percent of his power.

“I play with kind of three different driver swings,” Westmoreland said. “I have one where the ball speed goes to about 155 mph and flies about 250, and rolls out to 280. It doesn’t have enough spin or loft to leave the fairway. Especially in desert golf, it’s playing firm, you hit that out there it’ll go forever. So I’ll play that, and I’ll hit that interchangeably with a 2-iron. It basically goes the same distance, but I’m pretty much never gonna miss the face with the driver.

“Then if we’re trying to long drive it for whatever reason, we can get it up to about 206.”

Westmoreland actually said he “used to be a lot faster than Bryson,” but he’s since put those days behind him, prioritizing accuracy rather than distance.

5) Keep your options open with your club setup

Westmoreland is one of the few pro golfers left with a 1-iron in his bag. Well, it’s actually the loft of a 2-iron, he says, but “the 1 looks cleaner.” Admittedly, having a 1-iron in the bag does look pretty cool.

It’s not the only option at the top end of his iron setup, though. He carries a 3-iron, 4-iron and a 3-wood, and he will leave one of those out of his bag come competition time. He makes that decision based on which of the clubs he’s likely to use most often at different courses and in different conditions.

Remember, not all golf courses are the same, so your 14-club equipment setup doesn’t always have to be the same either. If you’re playing a short and tight course, for example, maybe you want to put a hybrid or high-lofted fairway wood in the bag to hit off the tee. If you’re playing in windy conditions, consider keeping a driving iron or long iron on deck for a more penetrating flight. These are just a few examples, but experiment with a number of options at the top end of your set so you’re ready for ever-changing golf course conditions.