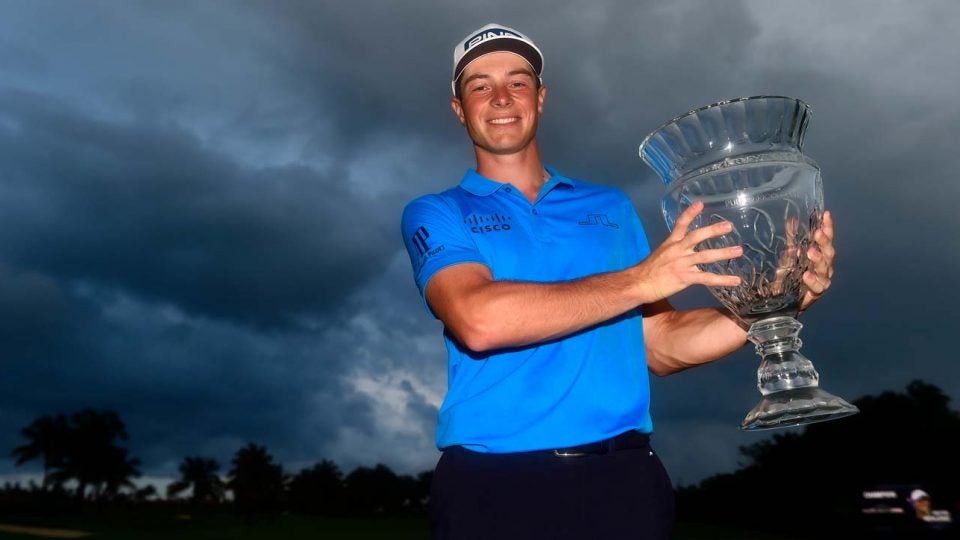 No winners of the Puerto Rico Open have won anywhere else after their triumphs on the island.
Getty Images

While Bryson DeChambeau and Patrick Reed were busy battling it out south of the border, a whole host of other intriguing stories played out across the world of golf. Here are four you might’ve missed.

Amateur Sarah Wilson nearly made history at the PGA Tour of Australasia’s Queensland Open last week. After becoming just the second female ever to qualify for the men’s event – Becky Kay was the first in 2018 – Wilson finished one shot shy of making the cut.

“It was an awesome experience,” Wilson said in an interview with Golf Australia. “It’s nice having everyone out there and cheering you on and coming out to watch you play golf.”

Wilson said earlier in the week that her ultimate goal was to make the cut, as no woman had ever accomplished the feat before, not ever her idol Kay. Ultimately she came up just shy after rounds of 74-72. But her effort did outperform Kay, who finished 10-over and seven shots outside the cut line in 2018.

A special shout out to local @sarahwilson270 – though she will likely miss the weekend by just one shot – rounds of 74 and 72 against the boys is a mighty fine effort!

“I think it’s really awesome to be able to follow in the footsteps of Becky Kay with her being my idol growing up and now playing alongside in some events she played is pretty cool,” Wilson said.

Sure, not a perfect ending — but an extremely impressive showing from the young Aussie.

Viktor Hovland earned his first PGA Tour victory with a dramatic birdie on the 72nd hole of the Puerto Rico Open on Sunday. The win marks the first win by a Norwegian on Tour, and while it was momentous moment in the rookie’s young career, he joined a list he might not want to be associated with after the win.

In the 11-year history of the event, no winner has gone on to win any other event after their victory in Puerto Rico. The closest anyone has come to breaking this curse is Michael Bradley, who won in 2009. He followed up his win with another Puerto Rico Open triumph in 2011, though that was his last Tour win.

Peculiar stat: across the 11-year history of the @PuertoRicoOpen, no winner has gone on to win any other Tour event after their PR triumph. Only '09 winner Michael Bradley won again…in Puerto Rico two years later. And yes, that includes '16 champ Tony Finau.

Martin Trainer has embodied the tough luck of fellow Puerto Rico Open winners since his breakthrough last year. He’s made just five cuts on Tour since stepping in the winner’s circle, with his best finish of 34th at the Tournament of Champions, an inflated result as the field size was…34.

The Puerto Rico Open winners curse gets even more bizarre when looking at the list of runners-up over that same time period. Jordan Spieth, Jason Day and Bryson DeChambeau all came up just short of wins in Puerto Rico before breaking through for their maiden victories (and much more) later in their careers.

The Puerto Rico winner’s list is more precarious now that Hovland has joined the fold. The Norwegian is regarded as a future star on Tour and should see more wins as he goes forward. But if he somehow never wins again, maybe this Puerto Rico Open curse will gain more serious traction.

The MENA Tour and European Disabled Golf Association announced an agreement last week that will provide opportunities for four golfers with disabilities to compete in four events on the MENA Tour schedule in 2020.

The exemptions will be available to EDGA-registered players who are ranked in the World Rankings for Golfers with Disabilities and players with a confirmed handicap of 4.4 or less. The tour, which competes in the Middle East and North Africa, hopes the exemptions will promote inclusion in the game and have a trickle-down effect that grows awareness of the sport.

“MENA Tour have shown great vision in making this agreement to include golfers with a disability in this exciting Tour by opening up these invitations,” President of the EDGA Tony Bennett said in a press release. “The agreement will encourage other organizations to take their responsibility to make golf a truly inclusive game more seriously.”

The first tournament with exemptions available is the Ras Al Khaimah Open, which will be held March 29-April 1, followed by the Northern Emirates Open and the Al Ain Classic.

Opposite-field events may not get the same attention as their more popular compatriots – this week, the WGC-Mexico Championship – but they still are packed with ample storylines and drama. This week, it even had some heartbreak.

Josh Teater came to the final hole of the Puerto Rico Open tied with Hovland at 19-under. After three steady shots, the 40-year-old faced a makable birdie putt to set the clubhouse lead. It came up just short. Hovland birdied the hole shortly after, ending Teater’s bid for a first win.

The journeyman, who has just 13 top-10s in his career, was visibly shaken during his post-round interview.

“Hats off to Viktor, that was a great putt,” Teater said as his voice trembled. “I’m just going to move forward. There’s nothing but good here. It was a great week and I look forward to next week.”

An emotional Sunday for @JTeater12.

In his 193rd TOUR start, he fell one shot shy of his first title. pic.twitter.com/uMHt5qpBe5

It was a career-changing opportunity that didn’t quite come to fruition for Teater, as his emotions clearly showed. A small consolation is that his top-10 finish earned him entry into this week’s Honda Classic. Teater surely would have preferred for his hands to be on the trophy, but golf can be a brutal game.