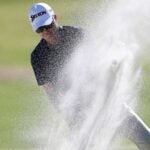 Martin Laird hits his ball out of a bunker on the 9th hole at TPC Summerlin on Sunday.

About a yard away, on the fringe of the 9th green at TPC Summerlin, he danced his left foot about a dozen times. Until he was secure enough to support the other quarter of him. Until his left knee, surgically repaired just four months ago, was secure.

His golf ball was plenty snug during Sunday’s fourth round of the Shriners Hospitals for Children Open. His second shot on the par-5 had burrowed itself into the front greenside bunker. Less than half of it was showing. Plugged plugged.

“He might not get this out of the bunker,” one announcer said on the Golf Channel broadcast.

“He’s got to be careful that ball popping up hitting him. And let’s not forget: He just had knee surgery five months ago, left knee surgery,” another announcer said.

“And you could hurt a wrist real easy, or a hand, too,” the first announcer said.

The ball went in the hole.

“What a shot!” a third announcer said.

“He made it!” the first announcer said.

“He sure did,” the third announcer said.

Laird found his footing. He took three practice swings. He slapped it out, sand blew at his head, and the ball took two bounces and rolled in.

Eagle, his third straight 3 on the hole.

Laird gave three pumps of his right hand, swiped the sand with his right foot, fist-bumped his caddie, handed the club to him and went to pick up his ball.

“I don’t have the list off the top of my head, but is that one of the greatest bunker shots you’ve ever seen?” a fourth announcer asked.

“Under the circumstances, it has to rank pretty high,” the third announcer said.

“From terrible break to eagle 3,” the first announcer said.