Tour pro psyched out by mid-tournament text from his coach 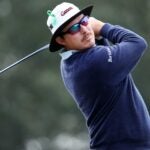 When a pitcher has a no-hitter going during a baseball game, players on his team won’t talk to him in fear of a dreaded jinx. It may sound silly to the uninitiated, but it’s a tradition entrenched in the game. Superstitions are a weird thing.

Like baseball, golf is also a game of superstitions. Some golfers will mark their balls with coins only from the 1960s, while others swap out balls after every bogey. Everyone has their own quirk that they use to help themselves play better.

And while there may not be a golf equivalent of baseball’s no-hitter rule, player’s psyches can still be fragile when they’ve got a special streak going.

Last weekend at the Houston Open, Joel Dahmen was a ball-striking machine off the tee. Through three rounds he’d missed just six fairways at Memorial Park, which prompted a text from his coach, Rob Rashell, reminding Dahmen how well he was striking the ball.

Which led to a predictable outcome.

“I started thinking about it today,” Dahmen said on Sunday evening. “So I hit a couple squirrelly ones because I was thinking about hitting it straight.”

Think of it as the 15-handicapper equivalent of hitting it right when your buddy tells you the one place you absolutely cannot miss is right.

Despite the jinx, Dahmen missed only three fairways during his final round en route to a 65 that lifted him into tie for 5th place. Still, note to Rashell: When your man’s rolling, leave him be!