Jason Kokrak, down 10 to start third round (!), wins Houston Open 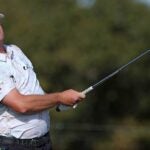 Jason Kokrak hits his tee shot on Sunday on the 17th hole at Memorial Park.

The shot of this Houston Open wasn’t a long drive, though Jason Kokrak, one of the game’s biggest hitters, will be remembered for those. Nor was it a long putt, though Kokrak, also sneaky good with the flat stick, dropped a few of those, too.

No, the winning blow at Memorial Park came off a short iron, the ball went 149 yards, and there was still 120 yards to go.

At that point, Kokrak had birdied three-straight holes on his way to taking a one-shot lead during Sunday’s final round, and he was in line for another after hitting his tee shot on the par-5 15th. Only as he landed his ball in the fairway, mud landed on his ball, and he prudently laid up short of the green.

“This is a smart play at this point, as you’re just unsure what the mud will do to it,” analyst John Wood said on the Golf Channel broadcast. “He’s just going to chip something down the fairway and leave himself a wedge in.”

From there, Kokrak hit to 5 feet, he birdied again, and he moved his lead to what would be an insurmountable two strokes on his way to a third career PGA Tour victory. The short shot went a long way. Starting the weekend 10 shots out of the lead, Kokrak followed with rounds of four-under 66 and five-under 65 to finish at 10-under and win by two over Kevin Tway and Scottie Scheffler.

To begin Sunday, Kokrak was two back of Scheffler, and at one point early on, five players shared the lead. On the back nine, Martin Trainer, who had begun the week at 2,000-1 to win, led by two, before Kokrak began his birdie binge.

Tway, after a 68, and Scheffler, after a 69, finished two shots back, and Kramer Hickok ended up three behind. After a spirited run, Trainer tied for fifth with Joel Dahmen.

Kokrak has now won three times in just over a year, after a long stretch of having never won. Watch out.

— Scottie Scheffler begins the final round at seven-under and one shot ahead of Kevin Tway, Jhonattan Vegas, Matthew Wolff, Kramer Hickok and Martin Trainer, and two shots ahead of Jason Kokrak, Russell Henley and Luke List.

— Scheffler bogeys the 499-yard, par-4 1st after missing a 6-foot par putt, and he falls into a four-way tie for the lead. At six-under are Scheffler, Trainer, Tway and Wolff. At five-under are Cameron Tringale, Henley, List, Hickok, Kokrak and Vegas.

— Kokrak birdies the 574-yard, par-5 3rd and he pulls into a five-way tie for the lead. At six-under are Kokrak, Scheffler, Trainer, Tway and Wolff. At five-under are Tringale, Henley, List, Hickok and Vegas.

— Tway birdies the 3rd after pitching to 5 feet, and he takes a one-shot lead. He’s at seven-under, Kokrak, Scheffler and Trainer are at six-under, and Tringale, Henley, List, Vegas and Wolff are at five-under.

— Kokrak birdies the 489-yard, par-4 4th after hitting his approach to 4 inches, and he moves into a share of the lead. He and Tway are at seven-under, Scheffler, Trainer and Henley are at six-under, and Tringale, List, Vegas and Wolff are at five-under.

— Scheffler birdies the 3rd after hitting his second shot to 3 feet, and he moves back into a share of the lead. Scheffler and Kokrak are at seven-under, Henley, Trainer, Tway and Wolff are at six-under, and List and Tringale are at five-under. Tway had bogeyed the 4th.

— Trainer and Tway birdie the 384-yard, par-4 5th — Trainer on a 27-foot putt and Tway on a 14-footer — and they pull into a four-way share of the lead. At seven-under are Kokrak, Trainer, Tway and Scheffler, and at 6-under are Tringale, Scheffler and Wolff.

— Scheffler birdies the 5th after rolling in a 17-foot putt, and he takes a one-shot lead. He’s at eight-under, Trainer is at seven-under, Kokrak, Henley and Tway are at six-under, and Adam Long, Tringale and Wolff are at five-under.

— Trainer birdies the 585-yard, par-5 8th after hitting his second shot to 11 inches, and he moves into a share of the lead with Scheffler. Trainer and Scheffler are at eight-under, Tway is at seven-under, Kokrak and Henley are at six-under, and Tringale and List are at five-under.

— Scheffler birdies the 8th after hitting his third shot to 5 feet, and he takes a one-shot lead. He’s at nine-under, Trainer is at eight-under, Tway is at seven-under, and Kokrak and Henley are at six-under.

— Scheffler bogeys the 444-yard, par-4 10th after three-putting from just off the green, and he falls into a share of the lead. He and Trainer are at eight-under, and Kokrak, Henley, List, Tway and List are at six-under.

— Trainer rolls in a 71-foot putt for birdie on the 214-yard, par-3 11th, and he jumps into the lead by himself. He’s at nine-under, Scheffler is at eight-under, and Kokrak, Henley, List, Tway and Wolff are at six-under.

— Scheffler bogeys the 11th after missing the green on his tee shot, his second-straight bogey, and he falls to seven-under. Trainer’s lead is now two shots.

— Trainer gets up and down from off the green on the 478-yard, par-4 12th, and he maintains his two-shot lead.

— Kokrak birdies the 115-yard, par-3 15th after hitting his tee shot to 6 feet — his third-straight birdie — and he pulls into a share of the lead with Trainer. Kokrak and Trainer are at nine-under, Sam Burns, Tway and Scheffler are at seven-under, and Joel Dahmen, List, Hickok and Wolff are at six-under.

— Trainer bogeys the 513-yard, par-4 14th after failing to get up and down after missing the green on his approach, and he falls out of a share of the lead. Kokrak is at nine-under, Trainer is at eight-under, Sam Burns, Tway and Scheffler are at seven-under, and Joel Dahmen, List, Hickok and Wolff are at six-under.

— Kokrak birdies the 583-yard, par-5 16th — his fourth-straight birdie — and he takes a two-shot lead. Kokrak’s at 10-under, Trainer is at eight-under, and Tway is at seven-under.

— Trainer bogeys the 334-yard, par-4 17th after three-putting, and Kokrak’s lead grows to three as he walks to the 18th green. There, he two-putts, he finishes at 10-under, and he holds on from there for his third PGA Tour victory.

“He’s a player to look out for at the biggest events for the rest of the season.” — Golf Channel analyst Trevor Immelman on Kokrak.