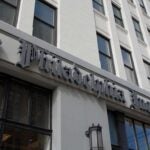 Some time ago, early on a Wednesday morning, I took out the recycling. Our bin, maybe like yours, is Dodger Blue with white type, a deep rectangle of thin plastic. It goes out weekly, loaded with the three dailies we get at home, plus various magazines and catalogues and unopened solicitations for insurance.

On my way to the curb on this odd Wednesday under discussion, a rogue gust of wind lifted from the bin a single sheet of paper, pale blue and folded in quarters, and deposited it on a bed of ivy beside the driveway. I retrieved it, unfolded it and saw that it was a 1995 notice from the Philadelphia Newspapermen’s Golf Association that listed our schedule of weekly events for the second half of that year’s season.

How this museum-quality, 25-year-old stray got mixed in with newspapers with 2020 headlines about President Trump and his handling of the Covid-19 pandemic I can’t say, but there she was, blue paper, bold black ink, with the PNGA logo — a golfer in follow-through superimposed over the Liberty Bell — at the top.

On Aug. 14, we were on the docket to play Merion West, sister course to Merion East, where Hogan and Trevino had won U.S. Opens. (Justin Rose’s turn would come along — in 18 years.) I didn’t need a Google consult to know that Aug. 14, in 1995, was a Monday. PNGA events were almost always on Mondays, when old-line Philadelphia clubs were typically closed and our gang — The Newspapermen! — could slip on in.

There were PNGA members who worked in ad sales and in circulation, on layout desks, in pressrooms. There were editors and news reporters and sportswriters. Newspaper sportswriters, then and now, often worked weekends, which made Monday an easy day to take off, just as barbershops are often closed on Mondays.

Others found other ways to evade work on PNGA outing days. Some members had shifts that started late and ended late and others used comp time to get Monday off. Most of us PNGA members were also members of the Newspaper Guild, though not Bob Hall, a PNGA member and the publisher of the Philadelphia Inquirer. His name is among the 60 on the sheet, alphabetized, with handicaps, from Bamberger, Mike (NH) to Yanni, Virgil (19).

I joined in 1987 as a newish high school sportswriter for the Inquirer and played, for some years, in a regular foursome with a City Hall reporter (Bob Warner), a TV critic (Jon Storm) and a magazine editor (Bill Eddins). You would not call our intra-group competitions war, but they were closer to that than hit-and-giggle.

On one occasion, Bob got up-and-down, most improbably, from a downhill lie beside a tree, and Eddins said something like, “Warner, you couldn’t do that again with 20 chances.” On attempt No. 17 or 18, Bob repeated his feat. Among the 10 or so groups playing on any given Monday, by the way, we were relatively fast.

At the end of play, or maybe at lunch, each of the day’s three low-net finishers were awarded golf balls as prizes from the PNGA overlords. A sleeve for the low man, two balls for taking second, one for third. I have no firsthand knowledge of the preferred make and model. I can say with near certainty that every low-net finisher was a white male wearing a collared shirt. For one thing, the PNGA dress code was strict. (Slacks were required even if the host club allowed shorts.) As for the organization itself, around since at least the 1920s, it was ossifying before our eyes, not that I ever saw an obit noting its death.

Our patron saint was a past PNGA president named Joe Greenday, who had been a longtime golf writer for the Philadelphia Daily News. Joe, surely like his predecessors, knew all the better Philadelphia head pros. It took some juice, to get us to the 1st tee. (Some weeks our only fee was a cash tip for the assistant caddie master.) The blue sheet’s summary of the 1995 Joe Greenday Memorial Tournament is a study in economy alongside exemplary use of capital letters: Golf, Dinner, Beer, Prizes.

In ’95, we played Llanerch, where the 1958 PGA Championship was played. We played Eagles Nest, a New Jersey course owned by Ron Jaworski, the legendary Eagles quarterback. We played Green Valley, where Bob Hall was a member. We played at least 15 others.

Some years, Aronimink, site of the 1962 PGA Championship, was on our list. It took our collective breath away. Arriving there was like being deposited in the English countryside. Your instinct was to keep looking over your shoulder. The PNGA was a great thing, if you liked golf and you were white and male.

Last week, when the KPMG Women’s PGA Championship was played at Aronimink, I brought my 1995 blue sheet, saved from recycling, to the press tent, a repurposed indoor tennis court. One of my fellow PNGA members, Joe Juliano, was covering the event, too. Joe’s first major tournament as the Inquirer’s golf writer was the 1986 Masters. (Good start!)

When I joined the paper a half-year later, after a brief stint as a traveling caddie, the sports editor then, Glenn Guzzo, explained that Joe had the golf beat but “we’ll throw you a bone” now and again.

The first bone tossed my way was the 1987 United Hospitals Senior Golf Championship. I interviewed Arnold Palmer as he sat in a cart and Arnold’s dentist, Howdy Giles, snapped a picture of that. Later that night I had a first date with a spirited Californian named Christine. We were married on the first weekend after the 1990 World Series. (I was covering baseball.) Chi Chi won that ’87 United Hospitals tournament, over Lee Elder. The Reds won the ’90 World Series, over the Oakland A’s. Annie Warner, daughter of Bob, was the flower girl at our wedding. Now she’s a trauma surgeon. Joe’s still on the golf beat.

In Aronimink’s indoor tennis facility, wearing our masks, Joe and I reviewed the blue sheet and played a few sets of Remember Him? Suddenly, I could see Reid Tuvim in our sports department again, flip-flops on his feet, belying the tension of 11 p.m. I could see John Lubell, reading the Daily Racing Form on his lunch break in the Inquirer newsroom.

We talked about David Tucker, one of our bosses and a weekend poet. We talked about Bob Hall and the news just then making the rounds, that the Inquirer and Daily News was selling its printing plant. “Five-hundred lost jobs,” Joe said. We talked about Mayer Brandschain, who started his career as a Philadelphia sportswriter in the 1930s writing under the byline Paul Prep. Mayer’s name is among the 60 on that mid-summer 1995 sheet.

Eventually, Joe and I returned to the matter at hand, the Women’s PGA at Aronimink. Sei Young Kim of Korea was looking to win her first major. Everybody was oohing and aahing about Aronimink.

Brandschain died in 1997. Lubell, I just learned via Wikipedia, is a scion of an Oklahoma oil-and-gas family. (No wonder he never looked worried!) Reid Tuvim, per a Google search, is the travel editor at the Inquirer.

The best newsroom poem I know is “And This Just In,” by David Tucker. If you like newspapers and poems you might want to read the whole thing. It’s short.

Those footfalls on the stairs when the night shift went home,
the sunlight fanning through the dinosaur’s rib cage
the janitor’s sneeze – we’re asking questions
we’d like to know more.

The moth in the clock tower at city hall,
the 200th generation to sleep there – we may banner the story
across page one. And in Metro we’re leading
with the yawn that traveled city council chambers
this morning, then slipped into the streets
and wound through the city. The editorial page
will decry the unaccountable boredom
that overtook everyone around three in the afternoon.
Features praises the slowness of moonlight
making its way around the house, staying
an hour in each a chair, the inertia
of calendars not turned since winter.

A watchman humming in the parking lot
at Broad and Market – we have that –
with a sidebar on the bronze glass
of a whiskey bottle cracking into cheap jewels
under his boots. A boy walking across the ball field
an hour after the game – we’re covering that silence.
We have reporters working hard, we’re getting
to the bottom of all of it.

After the 1990 baseball season, I told Tucker I wanted to take a leave from the paper, that Christine and I wanted to go to Europe, where I would work as a caddie on the European golf tour, with a plan to write a book about the experience.

I respected his position greatly. He needed somebody to cover the Phillies. For the golf beat he was all set.