Want to hole more putts? Stop sweating the result and start focusing on this instead

“What I’m trying to teach is how to send the ball true off the face and down its intended line,” Stan Utley says.

Your putting life is about to improve, people.

Today we begin a sporadic series known in this bureau as Stan Tells Most. Init, we pose a putting question to the putting guru Stan Utley, write down what he says, and share it with those who seek to improve their putting. You know, for a friend.

We can’t call the series Stan Tells All. Stan doesn’t claim to tell all or know all. Which is one of the reasons we find him credible in the first place.

(Also, he teaches putting. He can’t give away all his trade secrets for free.)

For the last 20 or so years, your correspondent — a self-described half-decent putter in his youth (but who among us wouldn’t say that?) — has become inept from six feet and in. Send in your “guaranteed” fixes if you wish, but please know they likely have already been tried. The results have been, to understate it, unspectacular.

I got Stan on the phone the other day and asked him why I could putt shockingly well on a practice putting green with a chalk line but couldn’t, try as I might, create an imaginary chalk line (aka a plumber’s line) on the golf course when playing for real.

Of course, part of the practice-green chalk-line success rate is repetition. Part of it is knowing what the putt will do. But even when I go up and down the chalk line, changing distances regularly, I still make a way higher percentage of putts than I do when putting in actual play. Also, when I putt on a practice green without the chalk-line, the results are far less impressive.

We must also make a nod in the direction of caring. Ambition has killed many worthwhile goals, including the ambition to make putts. The stakes on a practice green are almost immeasurably low, but that’s not the case, of course, on a golf course.

Which brings to mind a memorable two-word answer Brad Faxon once gave in response to a casual question from my friend to Gary Van Sickle years ago. Van Sickle saw Faxon on a putting green at a Tour event — I think it was at the Westchester Country Club — and asked him what he was working on. “Not caring,” Brad said. Not caring is a powerful thing. Ask a Buddhist.

Low stakes, repetition, lack of performance anxiety, those will all help you make more putts on a practice green with a chalk line. But those three things can’t explain making nine out of 10 six-footers, with the miss coming off a lip-out.

My last look at the hole, before I start the swing, is line. That last look has a huge effect. Stan Utley 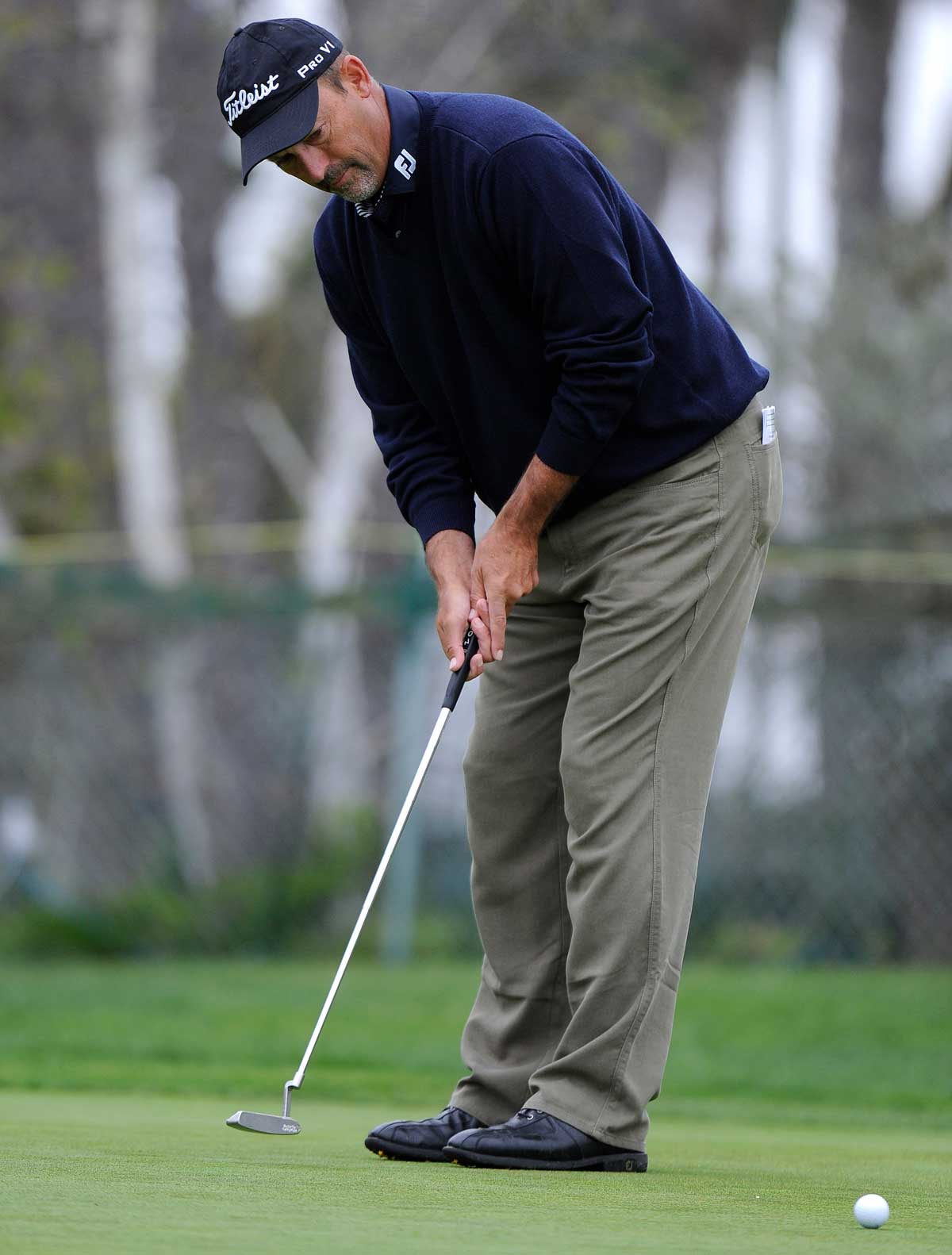 “What I’m trying to teach is how to send the ball true off the face and down its intended line,” Utley told me. “When you’re putting with a chalk line, you’re probably doing that. You’re more focused on the line than whether the putt goes in or not.”

But on the golf course, Utley says, the tendency for many golfers is to over-focus on whether the ball goes in or not.

Which is understandable, given that the goal of the game is to get the ball in the hole in the fewest strokes possible. Still, that doesn’t make all that focus helpful.

Utley says that most putters fall into two broad categories.

In Group I are the putters who imagine the ball falling into a certain part of the hole. For example, think of the hole as a clock with 12 hour markings. In this example, you’re a right-handed putter, the putt breaks left to right and on this particular putt, at the speed you choose, you can imagine the ball slipping into the hole at the 8 o’clock. The 8 o’clock hash tag is in your mind. It’s the thing you’re most focused on.

Then there’s Group II, to which Utley belongs. “I’m trying to start that putt on a line that’s say, seven inches left of the hole,” he said.

People who belong in Group I will have a harder time creating an imaginary chalk-line on to the course. My very goal.

I am in Group I, although there are rare days when I am putting well and I feel like I can see the whole putt ahead of time. You know how the TV golf broadcasts trace the shot while the ball is en route? Or the way you can see your putting line after you putt through dew or light snow? It looks like that in my mind’s eye (on certain days) but before the stroke is made. It’s a rare thing but I do have days like that, where I can see it and actually make it happen.

Utley said another putting coach, Mike Shannon, is an expert on figuring out whether you are in Group I or Group II — or in a hybrid group.

He said another putting coach, Craig Farnsworth, can be helpful about how you to go from the practice green to the actual course, about putting attitude. Utley’s specialty is the quality of the stroke, the strike and sending your putt down its intended line.

Utley did have one colorful description for why you should not be upset if a well-stroked putt does not drop. “You hit a bad putt. It’s not going in. A goose drops a load on it and now the putt falls. Did that make your bad putt good?”

Moral: Don’t get upset about the things you can’t control.

I asked Utley if that was his first question for his pupils, to figure out if they are See-the-Clock putters or See-the-Line putters.

I’m going to try to reinvent myself as a member of Group I. Focus more on the early part of the putt’s path.

“My last look at the hole, before I start the swing, is line — where do I want to start that putt, on what line?” Utley said. “That last look has a huge effect.”

When I practice with a chalk line, my last look is the line. When I’m the course, it is not.

But that was then.

Utley had to get off the phone. He had a lesson to give. I’ll be out when the snow clears, and maybe before.