Joan Didion didn’t play golf, but her writing had qualities for which all golfers should strive 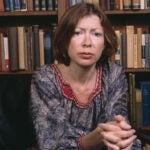 Joan Didion‘s didn't play golf, but her prose was like Tiger Woods and Ben Hogan at their best: precise and efficient.

Joan Didion is dead. She was a writer. She lived in New York, for the most part. But she was Scottish, in manner and method.

Didion was not a golfer, though she wrote a novel called Play it as it Lays. A grammarian might have changed two letters, to Play it as it Lies. Didion, I’m sure, had her reasons.

I saw her about a year ago, leaving a restaurant, somewhere in lower Manhattan. Man, she was tiny and alone. She didn’t look she was stopping for anything or anybody.

There’s no golf in Play it as it Lays, except a single casual reference, in dialogue:

“Your father’s only Waterloo was he was always a man twenty years ahead of his time,” Benny advised me that night in the Flamingo. “The ghost-town scheme, the midget golf, the automatic blackjack concept, what do you see today?”

A copy-editor might have suggested a period after concept. Also, mini for midget. Didion would not have cared.

The kicker in her obit in the New York Times describes her dedication to a lost California. She was a fifth-generation Californian. The obit’s last ‘graph is a quote from one of her books, Where I Was From:

“You were meant, if you were a Californian, to know how to lash together a corral with bark, you were meant to show spirit, kill the rattlesnake, keep moving.”

You can replace Californian with Scots-Calvinist. Not just do it. Get it done. You know, Hogan. Woods. I feel for Tiger. He wants to play the shots.

Didion taught herself to write with precision by typing out Hemingway. Her sentences were efficient.

Hogan and Hemingway are pretty much the same people.

A cover of Play it as it Lays shows a coiled snake, tongue out.

The starting point for golf, for playing by its rules, is to play the ball down. Play it as it lies. You hit it there. You figure it out. Tom Watson’s thing is the lie. How’s that ball sitting? It tells you everything about what you’ll do next. The lie, the lie, the lie. Watson. Another Scots-Calvinist. He hit that shot into the wall on the Road Hole, the year Seve won there, and that was it. Just stared it down. Wrong club, wrong shot, wrong time. What more was there to say?

Don’t touch your golf ball. Unless you’re on a tee or green. Advance it with a club. You have 14 of them. That golf ball moves, it’s on you.

Most of the greats get this. Some don’t.

Somebody tell — No, in the spirit of the season, I’ll omit the first name that comes to mind. Didion would wonder why. Who are you protecting? And why?

If you come up to your ball and there’s a snake by it, don’t do a thing. Just wait for the snake to get out of the way and play your shot.

If the snake moves your ball, then you can touch it. The ball, that is. You put it back where it was and carry on.

Don’t fuss. It’s an outdoor, cross-country game. The animals were there before we were. The rabbits dug the first holes. Sheep dug the first bunkers and mowed the fairways. Don’t kill the snake. Play your shot. Keep moving. Announce your score after your ball is in the hole.

Play it as it lies. The rest is commentary.

Keep moving. You start. You head out. You march home.

From the rulebook: “Rule 9 covers a central principle of the game: `Play the ball as it lies.’”