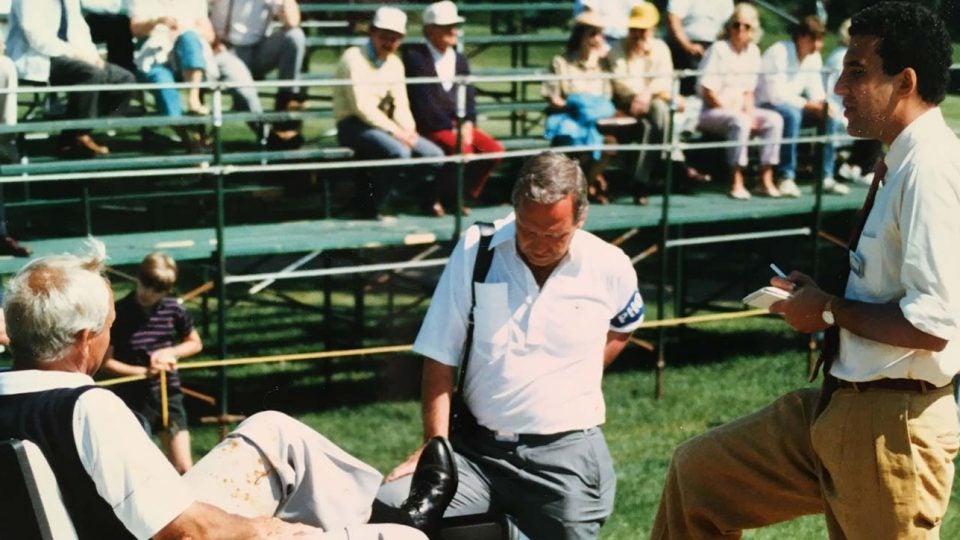 Ed. note: In golf, you always remember your first time: the first time you broke 100, the first time you played Pebble, your first visit to the range with your kid. For a new GOLF.com series — we’re informally calling it First-Time Fridays — we’ve asked our staff to recall some of their fondest golfy firsts. Here’s Michael Bamberger on the first time he interviewed Arnold Palmer.

The first time I interviewed Arnold Palmer was on a weekday in May in 1988 at the Chester Valley Golf Club, in a far-off Philadelphia exurb. Arnold was 58 and there to play in a senior event.

Years later, Arnold would tell people he loved being in his 50s, when he was a full-blown sporting icon, the money was rolling in and he really didn’t have to do anything, except play in senior events and be himself. When I saw him, he was sitting in a cart. He was bathed in sunshine and he looked like a million bucks. If he had a care in the world it certainly didn’t show. He was tan, rested and ready. He won later that year on the senior tour. He still had game.

I remember being excited and nervous but not overly so. I don’t recall exactly how the interview came about. I was walking on the range and somebody said, “Do you want to interview Arnold Palmer?” It might have been Howdy Giles, who was Arnold’s official dentist and unofficial personal photographer. Doc Giffin, Arnold’s longtime aide-de-camp, used to say that Howdy did his house in “Early, Middle and Late Palmer.” I tried my best, in this impromptu interview about nothing, but Arnold didn’t have much to say. He often didn’t. But when he did, the depth of the man was stunning. He understood so much about himself and others.

I saw Arnold in full — telling stories, sharing insights, being honest — maybe a dozen or more times over the years. At his condo at Bay Hill, at his casita near Palm Springs and at his home, office and club in Latrobe, Pa. That day at Chester Valley, though, gave no hint at what was to come.

The first time I saw Arnold was on June 4, 1979, at the Charlotte Country Club. That was exciting. It was a Monday and he was playing in a 36-hole U.S. Open sectional qualifier. He arrived in a shiny Caddy and heads turned, mine among them. I was caddying for pro named Randy Erskine, also trying to qualify for the U.S. Open at Inverness.

Before that Open was over, Sandy Tatum, a USGA official, had ordered the planting of the Hinkle Tree at Inverness, in the name of par. Hale Irwin won. Lon Hinkle finished T53. Last rites for his tree were read earlier this month. Arnold finished south of Hinkle and told a playing partner on U.S. Open Sunday, “Put a fork in me — I’m done.” Erskine didn’t make it through the qualifier. That’s golf. One thing leads to another to another.

I once heard Billy Payne, the former Augusta National chairman, refer to Arnold as “a great man.” Maybe that’s what Payne actually felt. I would say Arnold had a knack for making people feel good. He made millions of people feel good, with a wink, a signature, a handshake. By hitching his pants with a TV camera trained on him. Of course, there was some myth in the man, as there is in every icon, but he had some presence. For whatever reason, I didn’t feel his charisma on that May day in 1988 but I did on many other occasions, including that June day in 1979.

My wife Christine will sometimes ask me why I never wear linen pants as I did on the night of our first date. I would of course have no idea what she is talking about except for the fact that Howdy Giles took a photo of me interviewing Arnold on that Chester Valley driving range, had it printed and sent it to me by U.S. mail.

I left Chester Valley that afternoon, drove two hours to New York City and took Christine out for dinner at a restaurant on the Upper East Side called the Lion’s Rock, with a garden in the back. Our first date. What I wore at dinner I was wearing on the range. The restaurant is gone, Arnold is gone, the pants are gone. I’m glad I have the photo. The first time I interviewed Arnold. It was onward and upward for me from there.