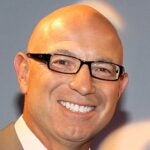 PALM BEACH GARDENS, Fla. — Not many people saw an unexpected and moving moment at the Honda tournament on Saturday afternoon. It unfolded, silently, when Genevieve Rosaforte came into the tournament’s media center, a seemingly ordinary, you might say dull, meeting room off a corridor that connects the hotel lobby at PGA National and the resort’s pro shop.

But if you looked at that room through a certain lens, you could see the life that once, and continues, to percolate in it. Genevieve’s late husband had been a fixture in that room for years.

How many times did Bob Costas or Mike Tirico or Dan Hicks pivot to Tim with those words, at Hondas and at Players Championships and U.S. Opens and Ryder Cups and other grand golf occasions? And there was Tim, with his shiny head, striped suit, wide tie and earnest and precise delivery. You felt like you knew him, right?

His putting coach got to FedEx after the last delivery and begged them to ship the putter overnight, which they did, and that’s the putter he used for this first-round, career-best 66.

What Tim had others didn’t. Insider was a title. It became his, quote, brand. But what it really was was a one-word job description for a sui generis position held by a sui generis man.

Mrs. Rosaforte’s main focus was not on the oversized electronic leaderboard at the front of the room or the reporters and photo editors tapping away on their laptops. It was on a large cardboard photograph of her husband standing on re-purposed catering table. The posterboard photo was the first thing you’d see upon entering the Tim Rosaforte Media Center.

A few feet down from the photo, Amanda Herrington, a young PGA Tour media official, sat at her workstation. Earlier that day, she had been remembering her first visit to the Honda press room, seven years ago, in the spring of her rookie year. Tim, battle-tested but not scarred, was seated immediately in front of her, and welcomed her in every way he could. Her eyes welled at the memory. So many others in golf media could share a similar story.

Tim died on Jan. 11. He had been diagnosed two years ago with Alzheimer’s. Still, in a sense, his death was a shocker. He played football in college, and he was a bear of man, fit in every way. You couldn’t imagine that anything could kill him. Not at 66.

In the days and weeks after Tim’s death, the outpouring was extraordinary. Jim Nantz of CBS, his familiar voice and face piped into a massive South Florida church from California for a Feb. 17 memorial service, said he could not recall anybody who, in death, had engendered such an emotional response.

Caddies, players, fellow reporters and broadcasters, tournament executives, Tour officials and sponsors all went to Twitter and Facebook and other places to express their sadness and pay tribute to a man who was famous for his fairness, the reach of his multiple cellphones — and his shaved head, funky glasses and fashion-forward suits.

Jack Nicklaus, via Twitter, on Jan. 11: “Many hearts, including Barbara’s and mine, hurt today after the passing of our friend Tim Rosaforte.”

Earlier in the Honda week, there was a ceremony at which Larry Dorman, a former golf writer for the New York Times and the Miami Herald before that, was given the Tim Rosaforte Distinguished Writers Award. Dorman, Craig Dolch, Mike Mayo, Dave George, Greg Stoda, Randy Mell, Larry Bush, Scott Tolley, Karen Crouse, Edwin Pope: There was a long run where West Palm Beach and Fort Lauderdale and Miami had newspapers that were devoted to covering golf and the papers spent the money to hire the writers who could tell the story of South Florida golf. Long before Tim was a central part of Golf Central, he was a central part of that group of reporters. They were a pleasure to read.

Recently, I re-read a first-round sidebar feature for the Fort Lauderdale Sun-Sentinel that Tim wrote about a mutual friend of ours, Mike Donald, a fixture of the South Florida golf scene, after the first round of the 1984 U.S. Open at Winged Foot. Hubert Green and Hale Irwin and Jim Thorpe had signed for 68s, two under, and the writers on deadline could not have had an easier day. Then Mike came in, practically at sunset, with a 68 of his own, throwing a monkey wrench into dinner plans. Tim wrote up the day with so much insight and understanding. He had Mike, Mike’s mother, Mike’s caddie, the groaning reporters, beer-drinking fans. It had everything. A rules issue. It had depth. Also, it was funny. One day, one story, in Tim’s life.

A friend of mine directed some episodes of The Lou Grant Show, starring Ed Asner. Lou Grant, of course, was Mary’s boss on The Mary Tyler Moore Show. My friend Mel once told me that Asner told him that the key to understanding Grant’s character was that he was a newspaperman at heart who had stumbled into TV news.

And that, I think, is an elemental part of why Tim registered so deeply with so many golf fans. Nobody was fooled by the suits. Did you ever watch The Sports Writers on TV, the ties barely on? Crooked ties, cigars, straight-talk? In spirit, Tim was on that show, all these years later. That’s my take. Also, he had an economy of movement, and with words, that, to me, brought to mind Arnold Palmer. Tim loved Arnold, and I imagine Arnold held Tim in the highest regard.

But I have one last thing to offer, about why so many people were so moved by Tim’s life and times and good work and tragic, way-too-early death, and this is it. He worked in golf. He worked in golf like Joe LaCava works in golf, like Slugger White works in golf, like Jim Herman works in golf. Tim had enough ability and more drive to do what millions of people wish they could do. Find a way to work in golf. Find a way to marry hobby and career. It’s some trick. Tim did it. Tim came right into your house, 200 times a year, reminding you that it could be done. Can’t think of anybody who did it better.