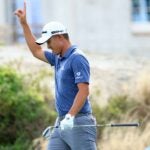 Collin Morikawa on Saturday after his eagle chip-in on the 3rd hole at the Albany Golf Course.

Earlier in the week, Collin Morikawa arrived in the Bahamas. On Tuesday, he became engaged to his longtime girlfriend, Katherine Zhu. On Saturday, he took the 54-hole lead at the Hero World Challenge. On Sunday, he could move to No. 1 in the world. There are good weeks. And then there are the seven or so days Morikawa has had. Here are three things you need to know after Saturday’s third round at the Albany Golf Course in New Providence, Bahamas.

Morikawa was at his best all week on Saturday. He made six birdies, one eagle and no bogies, shot an eight-under 64 and grabbed a five-shot lead entering Sunday’s final round.

“I’m dissecting my game in a really good way of just figuring out what I need to do consistently to be a better player and to be in contention a lot more,” Morikawa said. “Chipping, putting has put me in a spot so far through three rounds that I feel great and I’ve just got to keep doing that. I really need to figure out how to play hole 18 though a little bit better.”

After a drive down the fairway, he hit his approach into a right greenside bunker, only to pull off one of the day’s better shots. Farther back in the sand and with only about 10 feet of green between the fringe and the pin, Morikawa dropped it to about two feet, and he parred the hole.

“Just beautiful,” analyst David Feherty said on NBC. “What a work of art that shot.”

Brooks Koepka is in second

Five back of Morikawa and in second is Brooks Koepka, who shot a three-under 69. Patrick Reed, Viktor Hovland, Daniel Berger, Sam Burns and Tony Finau are six behind Morikawa.

“Five back, so I’ve got to do something, so I guess yeah,” Koepka said when asked whether it was important for him to be in the final pairing. “It’s always nice to be in the last group, but still got to play good.”

Bryson DeChambeau, who entered the day witb a one-shot lead, bogeyed four holes, birdied three and shot a one-over 73. Only Jordan Spieth and Rory McIlroy, with 75s, were higher on Saturday in the 20-man field.

The day’s low round belonged to Harris English, who started the day 19th, then shot a nine-under 63, with 10 birdies.