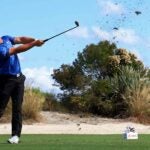 Bryson DeChambeau hits his tee shot on Friday on the 2nd hole at the Albany Golf Course.

Bryson DeChambeau, after a summer that included a renewed feud with Brooks Koepka, a breakup with his caddie and pushback around comments he made on the Covid vaccine, said this week that he “wanted to leave the game.”

“I just felt like, I don’t need any of this. Why? Why put myself through all this torture?” DeChambeau told the New York Post ahead of this week’s Hero World Challenge.

DeChambeau, who shot a 64 during Friday’s second round at the Hero and will enter the weekend with a one-stroke lead, told the Post that he began thinking of his future following the fallout from his comments in early August on the Covid vaccine. At that point, DeChambeau shut down most interview requests until the Ryder Cup in late September.

“I got hit pretty hard,” DeChambeau told the Post. “That’s why I kind of walked away, because people were damaging [my] character. It was all the stuff that was going on in social media. I was like, I really don’t need this. I can walk away and be totally fine the rest of my life, be happy and go and hit the long ball and call it a day.”

On the course, DeChambeau’s 2021 highlights included a win at the Arnold Palmer Invitational; a spot on the winning U.S. Ryder Cup team; and a dabble in the sport of long drive, when he starred in the World Long Drive Championships. Off the course, he was involved in a back-and-forth with Koepka that led to fans at the Memorial getting removed for taunting; a split with longtime caddie Tim Tucker; comments on his driver after the first round of the Open Championship, which received a response from the manufacturer, Cobra; a positive Covid test ahead of the Olympics; and controversial remarks on the Covid vaccine.

Around this time, DeChambeau told both the Post and the Full Send podcast in October that he had connected with actor Chris Pratt. On the podcast, DeChambeau said Pratt advised him to divorce the “fictional character” he inhabits on the course from the real person he is at home.

DeChambeau told the Post that “you learn to deal with it.”

“You have to learn on the fly,” he said. “There’s no training manual.”