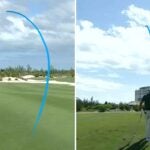 Collin Morikawa tried to warn us, we just didn’t listen.

When Morikawa made his way to the press room on Saturday at the Hero World Championship after seizing a five-stroke lead, he spoke with many of the same careful phrases he’s used on several occasions while sitting on leads throughout his career.

“This course, if there’s not a lot of wind, a lot of guys out here can make a lot of birdies early on. I just have to go out and just play the way I have been and be ready by hole one and play all the way through,” he said. “Nothing’s going to be a gimme tomorrow.”

We didn’t believe him, because we’ve seen Morikawa play with a Sunday lead before, and we because we know how comfortable he makes playing with leads seem. And of course, what else was he to say? That he was going to steamroll the competition on Sunday, skewering them with a comfortable display of elite-level ballstriking? That he planned to win by seven strokes, instead of his customary five?

So we didn’t listen to Collin when he told us there was a possibility, however small, that he might not breeze to victory in front of his hero, Tiger Woods, to become the second-fastest player to reach World No. 1 (behind only Tiger).

Well, perhaps we should have listened.

On Sunday at the Hero World Challenge, Morikawa did not breeze to victory. In fact, for the first time in his young career, we saw the slightest inkling of final round nerves. In the span of just seven holes, the 24-year-old watched as his five-stroke lead evaporated, turning instead into a one-stroke deficit and leaving him to spend the remainder of his final round chasing the lead.

It all started on the 5th hole, an innocent 500-yard par-4, where Morikawa’s drive found an awkward sidehill lie. As he stood over his approach shot, his play was clear: hit a cut of any kind, and he’d wind up in manageable range to escape with a bogey at worst. But then the two-time major champ did something uncharacteristic. A rare miss with his irons — the dreaded straight ball — which caromed directly out of play. The result of the shot? A lost ball and a drop from the previous spot.

“That might just be about the worst iron shot Collin Morikawa has ever hit,” Shane Bacon offered on the broadcast.

Morikawa stuck his second shot to three feet, but to no avail. The best he could do was escape with a double-bogey, and with other players charging, his lead was slashed from four strokes to just one.

Disaster struck again on the par-5 7th hole. On Saturday, Morikawa admitted he might “play back” if he felt an uncomfortable shot coming, but he was clearly feeling no such way from the 7th fairway Sunday, grabbing a fairway wood and stalking down a yawning approach into an unguarded green. A birdie would bring his lead back to two, and with trouble nowhere but left, that much seemed likely.

But Morikawa pulled his fairway wood, an ugly yank that nearly went so far left, it stayed inbounds. Instead, it held up, skipping into a bed of shrubs. The whole sequence resulted in another lost ball and another double-bogey. Suddenly, what was once a five-stroke Sunday lead had turned into a one-stroke Sunday deficit.

Morikawa steadied some after the pair of doubles, adding two pars as he headed into the turn. Still, he’ll need an major turnaround (even by his own gaudy standards) to return to the lead. Perhaps the World No. 1 in waiting will have to keep waiting, after all.