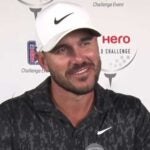 Brooks Koepka is in contention at the Hero World Challenge.

Brooks Koepka has never been one to lack confidence. When he’s on, there’s not a player in the game — other than Tiger — who can match his swagger and bravado.

Prior to his PGA Championship title defense in 2019, Koepka said he believed he could reach 10 major titles during his career — a number reached by only three men in golf history.

“I don’t see why you can’t get to double digits,” he said at the time. “I think sometimes the majors are the easiest ones to win.”

But since that exclamation-point victory at Bethpage Black, victories have been difficult to come by. Injuries have been a key factor in his “slump” in which he’s won just twice in two years, but even though he hasn’t added to his major total recently, that confidence hasn’t gone anywhere.

Despite a rough fall season in which his best finish was T38, the four-time major winner appeared to have figured some things out in his victory over Bryson DeChambeau in The Match last week. He’s carried that momentum to The Bahamas as he’s put himself in contention at the Hero World Challenge.

After a second-round 67 on Friday evening, a reporter asked if he thought he could return to the peak performance he displayed in 2018 and 2019.

Consider the golf world on notice. Koepka is comin’.