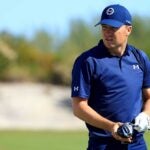 Jordan Spieth looks on during Round 3 of the Hero World Challenge.

For starters, Jordan Spieth and Henrik Stenson won’t lose much sleep over their rare rules blunder committed on Sunday at the Hero World Challenge. They started the unofficial tour event in 19th and 20th place — in a 20-player field — and finished in those spots on Sunday afternoon.

Stenson (19th; one over) and Spieth (20th; six over) were the only players over par on the week and the next closest to them was Rory McIlroy, who finished six under. So even with two penalty strokes added onto their score on Sunday, it’s not like Spieth and Stenson were rocketing up the leaderboard. But still; how did they hit from the wrong tee?

After the duo teed off on the 9th hole they were halfway down the fairway when they were met by rules officials who told them of their blunder. The 9th tee markers were actually on the 17th tee on Sunday. Both had to re-tee and were assessed a two-stroke penalty.

“Yeah, I’m still not sure which way we played it, but yeah, we kept our heads down [after] finishing out on hole No. 8 and walked to the 9 tee box that we did on Wednesday, Thursday, Friday, Saturday and put the ball down and hit some beautiful tee shots,” Stenson said. “Then when we went down to the hole, went down to the balls. The rules official said, ‘Did you hit off the right tee box?’ And we’re like, well, yeah, kind of — and then we looked back and we saw that there was another one forward and left. So obviously they switched things around and put 17 on the 9th tee box today and 9 was in a different place, and we didn’t pay attention being first out and just motoring along.”

“I mean, personally, I’ve never experienced that before,” Spieth said.

The TV broadcast said players were warned before the tournament started that those tees might change on Sunday. They also said it was posted in the locker room.

“Well, they said that in the scoring there was a sheet saying that there was a new yardage on No. 17, but there was nothing about No. 9,” Spieth said. “… I actually didn’t think we were going to get penalized because it’s a charity event, but then I realized there’s world ranking involved and all that. I think the frustrating part for us now is that every other group’s going to be — they’re making sure to tell them, but for us they didn’t. It obviously didn’t matter for us, which is fortunate I think for those guys.”

To their credit, Spieth and Stenson were good sports about the penalties. They actually experienced other issues on that tee box, too.

“I teed it up first and it wasn’t my tee, so Michael told me it’s not my tee.” Spieth said. “Then Henrik hit. Then I teed up too far in front [of the markers] and he told me to scoot back. So all in all we were so focused on where we were teeing off.”

“Now you’re really, you just spoiled the whole thing,” Stenson said to Spieth. “Like, look at these guys, they don’t know who’s going to hit. Once they figured out who’s hitting, one guy’s trying to tee up in front and then they both hit from the wrong tee box. It’s like I guess we got what we deserved.”

The penalties also led both players to start thinking about packing their bags.

“My question was if we could just finish 19th and 20th and leave after 9, but that wasn’t an option, either,” Stenson said.

“Yeah, he did,” Spieth said. “He asked them if we could just go to the airport and I said I’m down.”

We think they were joking. We think.