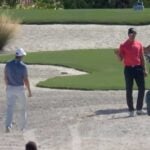 Jordan Spieth and Henrik Stenson are approached by rules official Stephen Cox on Sunday on the 9th hole at the Albany Golf Course.

The field at the Hero World Challenge was given a few extra yards, and Jordan Spieth and Henrik Stenson were given a two-stroke penalty.

During Sunday’s final round, the 9th tee box at the Albany Golf Course was moved up after being flipped with the adjacent 17th box, but Spieth and Stenson, playing in the first pairing of the day, played it as it had been and were hit with a two-stroke penalty. The 20-man field, Golf Channel’s Notah Begay said, were told the switch could be coming.

Earlier in the tournament, the par-5 9th had been playing to its full 632 yards, but Sunday, the tees were moved forward and to the left, where the 17th tee box had been. Hitting to the left of a sign that labeled the hole as the 17th, both Spieth and Stenson teed off for the 9th hole, then were told by rules official Stephen Cox of the infraction and went back and played from the correct tees.

According to Rule 6.1b, “a player must start each hole by playing a ball from anywhere inside the teeing area under Rule 6.2b. If a player who is starting a hole plays a ball from outside the teeing area (including from a wrong set of tee markers for a different teeing location on the same hole or a different hole): The player gets the general penalty (two penalty strokes) and must correct the mistake by playing a ball from inside the teeing area.” The rule also states that “if the player does not correct the mistake before making a stroke to begin another hole or, for the final hole of the round, before returning his or her scorecard, the player is disqualified.”

Spieth, after his second tee shot, hit his fourth stroke into the water and ended up with a triple-bogey eight. Stenson finished with a seven.

“It is a two-shot penalty for both players, and it is something that was posted in the locker room and mentioned to the players throughout the week heading into the event so not any excuses here, but sometimes just a little bit of an oversight,” Begay said on the broadcast.

“The players used to going where they’d go,” announcer Shane Bacon said. “But these tees flipped, and it’s going to be a two-shot penalty for both these players. And I’m assuming the chili is fairly warm right now.”

“That would be a very fair assumption,” Begay said.