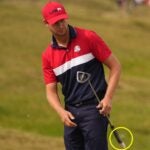 For nearly a decade, Harris English managed to use a Ping Palm Lock putter grip with very little fanfare. Outside of Tiger Woods’ Ping PP58, it’s rare that a putter grip receives any sort of attention during a tournament week. Then again, English’s grip is anything but ordinary.

Earlier this year during an entertaining 8-hole sudden-death playoff at the Travelers Championship, golf fans were introduced to the tattered handle affixed to the end of English’s Ping Hohum putter. The grip has been around going back to English’s day at the University of Georgia.

With little to no rubber left on the surface of the grip, English logged wins at the 2021 Sentry Tournament of Champions and Travelers Championship to earn a spot on the United States Ryder Cup team. With the putter playing a major role in his most recent Tour victories, there was a better chance of a meteor colliding with Earth than English changing putter grips prior to the biennial matches.

English continued to use the grip in its current form during the first two days of action at the Ryder Cup, but things were about to change. As he strode into the Whistling Straits clubhouse to prepare for his Sunday singles match against European veteran Lee Westwood, he looked down to see Steve Stricker’s name pop up on his phone.

“I get to the course on Sunday — I’m literally walking into the clubhouse — and I get a call from Steve,” English recalled on the Fore the People podcast with pro golfers John Peterson and JJ Killeen. “I had no idea what he was calling me about; he hadn’t called me this whole week. He said, ‘Hey Harry, I’ve got some bad news. We’ve got the head rules official here and he wants to take a look at your putter grip.’ I’m like, s—.

Recent photos of English’s grip reveal the cloth material, which was once concealed by a rubber compound, was fraying at the butt end of the grip — better known as the “banana flap” — leaving the rubber cap exposed. Up until the Ryder Cup, English had never received a complaint about the grip, but with additional eyeballs on the event, an eagle-eyed viewer reportedly noticed the wear and complained. Was this a bit of gamesmanship? (It’s important to note that the USGA put rules in place banning “armchair golf rules officials” in 2018.)

Minutes later, English was on a conference call with “a couple of USGA guys and the Ryder Cup official” who confirmed the grip was non-conforming.

In need of a quick fix prior to going head-to-head with Westwood, vice-captain Davis Love III offered his services and performed “emergency surgery” on English’s grip to keep it in the bag.

“Davis, the savvy deer hunter and knifesman he is, got an X-Acto knife and cut the part off,” said English. “We gauzed it so it would be flush with the other cloth part. He did it in a few minutes. He finished it, gave it to the rules official and the rules official had to go give it to [Padraig Harrington], I guess, to OK it. Then I went out and played with it.”

Potential disaster averted. While English would go on to lose his match against Westwood, he still left Wisconsin with his trusty putter grip. For the moment, it’s still part of his putter’s DNA, but English knows the grip’s days are numbered.

All good things must come to an end.