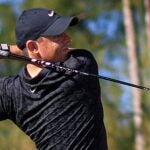 Rory McIlroy hits his tee shot on Thursday on the 10th hole at the Albany Golf Course.

Among the 20 players at this Hero World Challenge, the Golf Channel graphic reminded us, are: 10 major winners, five FedEx Cup champions, four Players Championship winners, 14 of the top 20 in the world golf ranking, and 16 winners from this past year. The numbers didn’t lie. These guys were good Thursday. Here are three things you need to know after the first round at the Albany Golf Course in New Providence, Bahamas.

Rory McIlroy, Daniel Berger and Abraham Ancer were the best of the best. Each shot six-under 66, albeit in different ways. Ancer bogeyed just one hole, the par-5 9th. Berger birdied his first four holes, and five of his first seven. McIlroy had six birdies and an eagle — and a double-bogey seven on the 9th.

“On the 9th, pulled my tee shot but got away with it and sort of kicked around that fairway bunker and had enough club to get there in two, so I was trying to pull a shot off and I didn’t and ended up making a double from it,” McIlroy said.

“Yeah, happy with how I responded on the back nine after that. Played the back nine in five-under par. Yeah, it was a nice little response to not quite a mental error. I mean, I committed to the shot, I just didn’t make a great swing. Yeah, it was nice to play the back nine the way I did and put myself back in the tournament.”

One shot back of the leaders, after 67s, are Justin Thomas, Brooks Koepka and Webb Simpson. Two back are Tony Finau, Viktor Hovland, Collin Morikawa and Patrick Reed, who was two-over after five holes.

“A little disappointing, but at the same time, I didn’t shoot myself out of it, so I’m all right,” Koepka said.

Every player breaks par but two

Eighteen of the 20 players in the field broke par and are within five shots of the lead.

In 19th was defending champion Henrik Stenson, who shot an even-par 72. In 20th was Ryder Cupper Harris English, who bogeyed the 17th and triple-bogeyed the 18th on his way to a three-over 75.