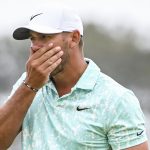 Brooks Koepka is among the favorites at Royal St. George's this week.

If there was ever a golfer who proves the sport is more mental than physical, it’s Brooks Koepka. That’s not to take anything away from his technical gifts, but by his own measure, his biggest asset is his mental game. He says he struggles to concentrate during non-majors, but when the biggest events roll around he morphs into focus right on cue and becomes the man to beat.

On Tuesday before the start of the 2021 Open Championship, Koepka shared some insight into how his mind works — and it’s something the rest of us can learn a lot from, on and off the course.

Claude Harmon III, Brooks Koepka’s coach, put it rather succinctly in his GOLF.com podcast a few weeks ago. He explained that in golf, there are two different kinds of mistakes: mental (or “execution” errors), and technical errors. He says one of the biggest mistakes amateurs make is that they focus too much on the latter.

“So many golfers are predisposed to thinking everything they’re doing is a technique issue,” he says.

But back to Koepka, who says technical errors aren’t things that keep him up at night. He accepts that they come and go.

“I don’t mind making mistakes, making a bad swing, whatever,” he says.

But what really bothers him, he says, is making a mental mistake.

“At the PGA I started off with a double. I made a mental mistake, so that drives me nuts,” he says. “I kind of pride myself on not making mental mistakes during majors.”

Mental mistakes can run the gamut of all kinds of things: It could mean making a bad decision on what club to hit; not aiming far enough away from trouble and missing in the wrong spot because of it; being distracted while you’re standing over the golf ball and not backing off, and so much more.

The concept of mental mistakes may seem like something that’s unique to Tour players. Maybe you don’t think you’re good enough to worry about your mentality. But for golfers of all levels, this is the kind of low-hanging fruit that pros care a lot about, because they know eliminating them can do more good for their game than almost anything else.