Best basketball player on Tour? Gary Woodland says he has no competition

You’ve probably heard Gary Woodland’s story before, perhaps on the final day of the 2019 U.S. Open when he was holding off Brooks Koepka and winning the first major of his career.

We’ll tell it again here, but this time add some much-needed clarity and put an end to the debate you didn’t know you needed the answer to: Who is the best basketball player on the PGA Tour? This week’s Subpar — a new GOLF.com show hosted by former PGA Tour player Colt Knost and friend Drew Stoltz — attempts to settle that controversy.

First, some context. Before Woodland was a star golfer, he was a star basketball player. He even got a scholarship to Washburn University out of high school, but after his freshman season he transferred to the University of Kansas to play on a golf scholarship. He discussed the abrupt ending to his basketball career after winning the U.S. Open at Pebble Beach last year.

“I always believed if basketball didn’t work out I could fall back on golf, and our first game [at Washburn] we played Kansas at the University of Kansas,” Woodland said. “They were ranked No. 1 in Division I, and we were ranked No. 2 in Division II. And that decision got forced on me really quickly. I was guarding Kirk Hinrich, and, like, OK, I need to find something else, because this ain’t gonna work. And that was my first game in college. I was a two-time state champion, All-State, blah, blah, blah, but that was a different level.”

Woodland wasn’t able to hang with Hinrich, who later had his jersey retired by KU and enjoyed a 13-year pro career, but the 35-year-old says he still has plenty of game. In fact, nobody on the PGA Tour would stand a chance against him.

“Yeah we need to stop that,” Woodland said. “They can’t play. I don’t know some of the younger guys. … Dustin Johnson can dunk, I’ve seen him do it. His brother can play basketball; his brother played in college, Austin can play. But no, there’s nobody that’s going to beat me.” 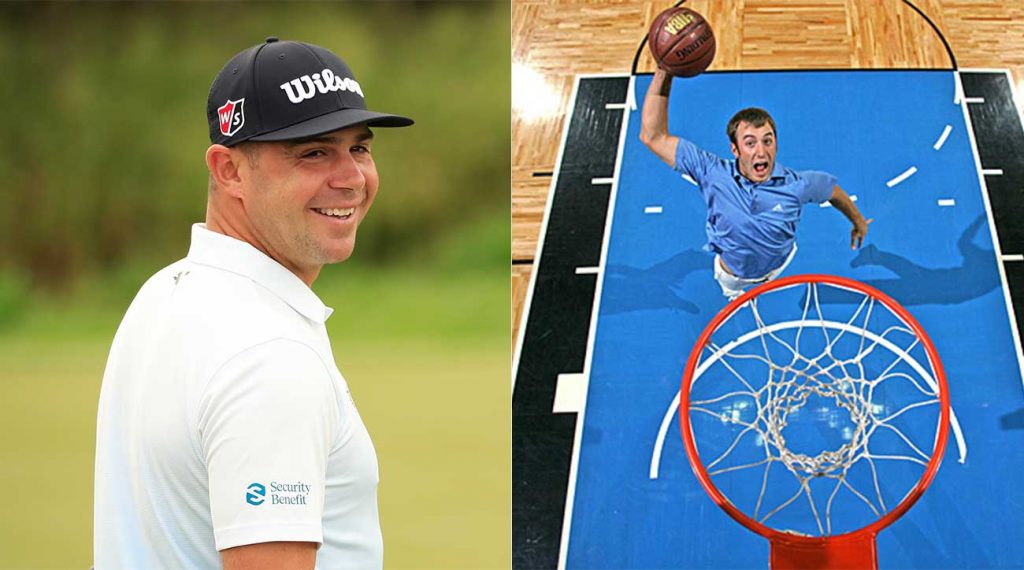 Dustin Johnson’s name is often brought up when it comes to Tour players and hoops prowess — apparently he beat former NBA player Shane Battier in a 3-point contest at a WGC promotion in 2014 — and a few years ago Tony Finau said he’d be the man to beat in a dunk competition, but didn’t mention an actual game. Golf Channel’s Rex Hoggard actually conducted a thorough investigation on this topic two years ago, concluding that Smylie Kaufman, Jordan Spieth and Andrew Loupe, among others, have some skill on the hardcourt as well. But none appear to have Woodland quaking in his golf shoes. Woodland always thought highly of his game, too, until he had that rude awakening in college.

“When I got to KU, all I wanted to do was play golf,” Woodland said on Subpar. “My whole life, especially growing up where I did, I was better than everybody in everything that I did, but when I got to KU all of a sudden on a national level I wasn’t better than everybody. I had to work to improve. I was playing five-man at KU, and it wasn’t until early in my junior or senior year that I became the better player on the team, so it was a learning process for me.”

You can watch and listen to the entire show below, which consists of Woodland discussing his Open victory, playing alongside Patrick Reed during his rules infraction at the Hero World Challenge and more. Woodland talks about basketball on Tour at the 25-minute mark.