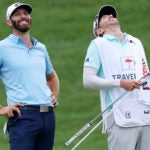 Dustin Johnson and his brother and caddie, Austin Johnson, had plenty to smile about on the 18th hole on Sunday.

Dustin Johnson stood on the 18th tee at TPC River Highlands on Sunday with trees and sand on his left and trees and sand on his right. He stood, too, with Kevin Streelman right behind him. After Johnson’s bogey on the 16th hole, his lead was down to a stroke during the fourth round of the Travelers Championship. Johnson needed his best.

He got the best. Of the day and nearly the week in one category. And the tournament, theoretically, in another.

Johnson grabbed his driver and pounded his ball 351 yards down the left-center of the fairway. Three shots later, he had his par, and he had his 21st career PGA Tour victory.

“Touch ’em all,” CBS analyst Dottie Pepper said after the drive, using a reference to hitting a home run.

“Houston, we have liftoff, that one,” CBS analyst Nick Faldo said, using a reference to a space shuttle launch.

Indeed. All of the above.

To that point on Sunday, only Will Gordon, at 336 yards, had hit a drive farther on 18. After Johnson’s shot, only one ball had gone farther on the weekend. Sergio Garcia’s 356-yard poke a day earlier, which was followed by three putts from 6 feet for a bogey. No drives went farther in Round 2.

None of those shots, too, were with the tournament directly at stake. Johnson not only was deep. He was clutch. His drive gave him just 83 yards to the hole. Pitch-and-putt distance.

“I managed to hold it together and hit some really nice shots on 17 and 18,” Johnson said.

Johnson needed his best. He got the best.