WATCH: Xander Schauffele’s chances at Colonial end with one of the worst lip outs you’ll ever see 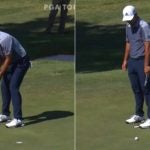 Xander Schauffele lips out on the 17th hole Sunday at the 2020 Charles Schwab Challenge.

Viewer beware: If you have painful memories about bad breaks on the golf course, especially relating to missed short putts, you might not want to watch the following video of Xander Schauffele from Sunday evening, in which his hopes for a fifth PGA Tour victory were wrenched away by one of the worst lip outs you will ever see.

Twice late in the final round of the 2020 Charles Schwab Challenge it seemed that Schauffele would lift the trophy on the 18th green. And twice those chances vanished on the very next hole. The second time it stuck.

Through 14 holes on Sunday at Colonial, Xander found himself at 15 under and tied for the lead with four holes to go. But things went sideways at the difficult par-4 15th hole, where his second shot found a water hazard to the left of the green.

But Schauffle wasn’t done yet. He drained a 31-footer to limit the damage at 15 to a bogey, giving him a chance with three gettable holes to play. At 16, he faced a 25-footer for birdie and sank that one, too, moving him back into a tie on top of the leadeboard.

All he needed to do from there was to close out his round with two pars to get into a playoff, or make one birdie to win the tournament outright. And everything was going according to plan when he stood over a 3-footer for par at 17. Then the golf gods turned their backs on the rising American star.

Schauffele hit his putt firm and straight and watched as the ball began to drop into the right side of the cup, before rolling around the edge nearly 360 degrees and popping back out onto the putting surface.

Schauffele was able to clean up the remaining putt for bogey, but the damage was already done. He followed it up with a par at 18, leaving him one shot short of co-leaders Collin Morikawa and Daniel Berger, who headed to a playoff to battle one-on-one for the win. Berger parred the first playoff hole to win.